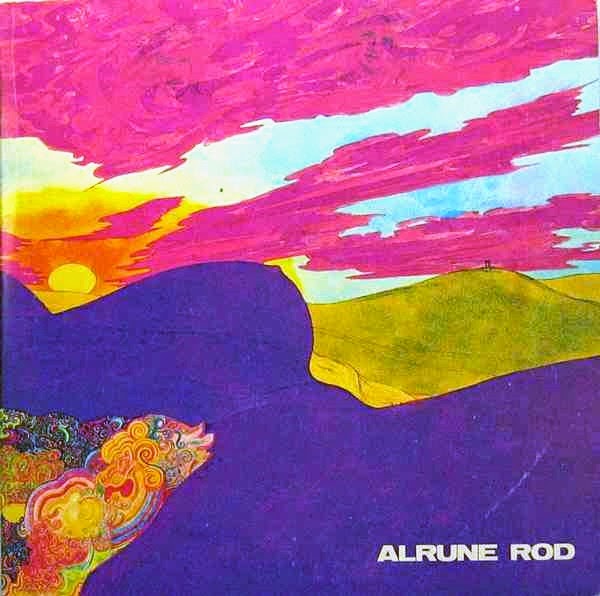 
Alrune Rod is probably one of the most important Danish rock bands from the psychedelic era, and along with STEPPEULVENE, generally considered the epitome of Danish psychedelic rock and the Danish counterculture movement of the1960s and 1970s in general.


Alrune Rod, colloquially referred to as 'Alrunen', were formed in 1968 by Leif Roden and are considered to be the pioneers in Danish psychedelic and artistically oriented rock music, along with acts like BURNIN' RED IVANHOE , STEPPEULVENE, CULPEPPER'S ORCHARD, BLUE SUN and ACHE. Alrune Rod debuted with the single 'Tæl Aldrig I Morgen Med' in 1968 and the full length studio album 'Alrunes Rod' in 1969, followed by the highly acclaimed 'Hej Du' in 1970 and 'Alrune Rock' in 1971, which was released in a Danish language version and an English language version. The remaining three albums 'Spredt For Vinden' from 1972, '4-vejs' from 1974, and 'Tatuba Tapes' from 1975 are generally considered sub par compared to their earlier releases. Nonetheless, 'Tatuba Tapes' is notable for being recorded live in the studio.


Their musical style is often described as a hybrid between THE GRATEFUL DEAD and early PINK FLOYD. They initially composed fairly long songs, typically of 10 to 13 minutes of length which blended the heaviness of the blues rock with the complexity of art rock, some of their compositions bordering on bein symphonic. 'Hej Du' is considered their masterpiece with compositions like hard rocking 'Du Taler Og Siger' and the almost twenty-two minutes long 'Perlesøen'. While their early efforts are characterized by a relatively dark atmosphere, their post-'Hej Du' albums contain shorter, livelier and more accessible tunes, which nonetheless retain several progressive elements. Lyrically, Alrune Rod dealt with complex topics like the human psyche as well as society and politics but were not above addressing more trivial topics like love and rock 'n' roll rebellion.


Eponymous debut album from this quintessential Danish group Alrune Rod (Mandrake Root), which was highly touted in the underground scene for their disregard to commercial aspects of the music business. Indeed their heavy psych-prog, sung in Danish (apparently a first), sounds like a darker Vanilla Fudge or Floyd (between Saucerful and Atom Heart) was full of lengthy tracks with elongated solos, dark brooding vocals and multi-movement tracks. Graced with a very sexy psychedelic gatefold artwork, the album has gained a cult status in its homeland and the vinyl is fetching considerable price.
From the very first notes of the opening eponymous track (10-mins long), it is clear that this album is not wedding dancing party music, and should you find a woman willing to make out to it, get a grip on her and marry her! ;o)p) And if the AR track was not enough, wait till you get a load of the following 10-min Natskyggevej (yeah, bless you too! ;o), which is definitely even deeper and sombre with the ever-present organ. Even if sombre, the ambiances are actually often beautiful and sometimes solemn, but also menacing and spellbinding. Closing the A-side is the short and unusual Hvor Skalwhatchymacallit with some acoustic guitars and congas. Bassist Roden's voice can be an acquired taste, especially on tracks were vocals take a more upfront role.

The flipside only contains two more epics, starting with the 12-min 3-phase Bjergsangen which sounds much like its cousins, searing guitar lines, good base work and enthralling drum playing, but the middle section is a bit awkward and add to the feeling that the music also has an anaemic side to it. Ziegler's organ sounds like a cross of Banton meeting Jon Lord through Kaye or Wright, but fails to take the lead from Giese's fuzzed-out guitar lines. Closing the album is the 13-min+ Rejsen Hejm (Pardon my Danish) is the most dramatic of the album, and its dynamics are adding a bit of a third dimension to the album.

AR's debut album is not a really easy listen, especially given that the album is rather long, (approaching the 50 minutes), but should ravish organ-driven hard rock with a psych edge! Although likely to please most progheads, I'd warn those liking very complex symphonic rock (ala Yes or ELP), that they might not find what they're looking usually for in this group.
Posted by Unknown at 8:25:00 AM