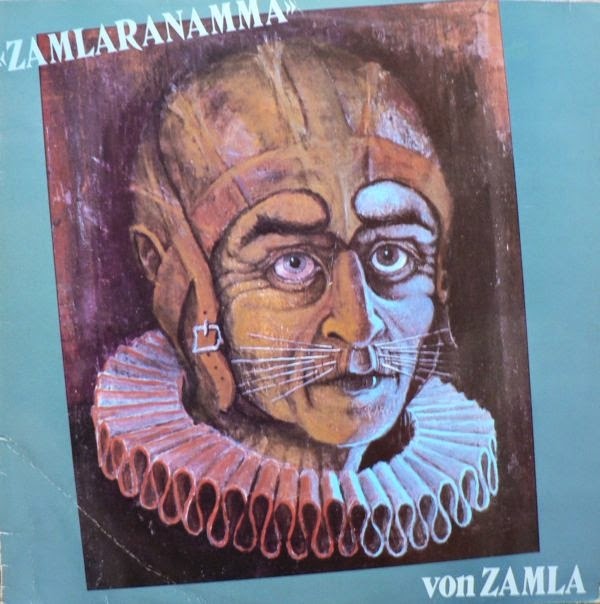 Founded in 1981 by keyboardist Lars Hollmer and guitarist Eino Haapala this zany band was an off-shoot of Sweden's Samlas Mammas Manna whose brand of RIO made them popular in Sweden in the 1970's but kept them relatively obscure elsewhere.
Von Zamla released two studio albums in their short career; Zamlaranama (1981) and No Make Up (1983). Brimming with Nordic Folk Melodies,thanks toHollmer's amazing accordion work the albums feature much less improvisational work than their earlier Sammlas work. One of the defining qualities of the band is their sense of theatre,comic theatre to be precise and this shines through both their albums.
This band represents a fascinating link to some of today's more creative bands such as Birdsongs of the Mesazoic and Miriodor.

After the dissolution of Samla Mammas Manna (as Zamla Mammaz Manna), master musicians Haapala y Hollmer decided to renew their partnership with this project Von Zamla, together with other two musicians from Albert Marcoeur's band. The result: a musical offering whose main bet was on multicolored melodic motifs, extravagant tratments, heavily relying on dissonant chord progressions and pretty recurrently sustained on counterpoints regarding the arrangements. Zamlaranamma is the first recorded manifestation of this result. Von Zamla's music is deeply challenging while not being particularly aggressive - their compositions and style bear the heritage of ZMM but with a more light-weight attitude toward the interactions between all musicians. The absence of a drummer, or more precisely, a specialized percussive section, allows the ensamble to focus more enthusiastically on the amalgamation of keyboards, guitars and woodwinds, although the rhythmic basis still plays a solid role at ordaining the aforesaid amalgamation. The strong position of the accordion helps the band to elaborate a folk-based depth within the confines of the band's overall vision. The opener 'Harujänta', bearing a pletoric aura of celebration with various hints to Northern Europe folk, is a definite proff of the line of work I've just described. later on, 'Clandestine' and 'Original 13/11' will persevere with the special, bizarre magic that Von Zamla instill on their particular approach to RIO: the former includes an effective melodic twist that leads to a werid musical box-like final motif, and 'Original 13/11' is headlong for the delivery of overwhelming exotic ambiences. 'Rainbox' displays a more melancholic mood, sweet and suave, but not without its proper touch of mystery. 'Doppler' is one of my absolute fave tracks in the album (and I also love the extended live rentdition that appears on the 1983 album.. just amazing!!) - from the first time I listened to its sinister spirals of neurosis and spacey cadences I was hooked forever till the end of time. In many ways the somber spirit we find in this track is a remainder of the sophisticated tension so clearly illustrated on ZMM's swansong Familjiesprickor. Other tracks in which Von Zamla are the nocturnal 'Temporal You Are' and the last two numbers 'Antsong' and 'Tail of Antsong', genuine brainstorms of atonal colors. 'Ten Tango' brings back the band's softer, althoug displaying more intensity and mystery than track 2, particularly due to the hypnotic use of texturial ornaments in a weird confluence of tango-fusion, Stravinsky and gypsy folk. All in all, "Zamlaranamma" is an excellent RIO item from the 80s and a very worthy successor of the SMM/ZMM tradition: bands like Alamailman Vasarat, Hoyre Kone, 5UU's and Pochikaite Malko have evidently been influenced by the musicial ideology exposed here, so it leaves Von Zamla with the extra credit of becoming a point of reference for some of the moets bizarre prog music created in the last 20 years.