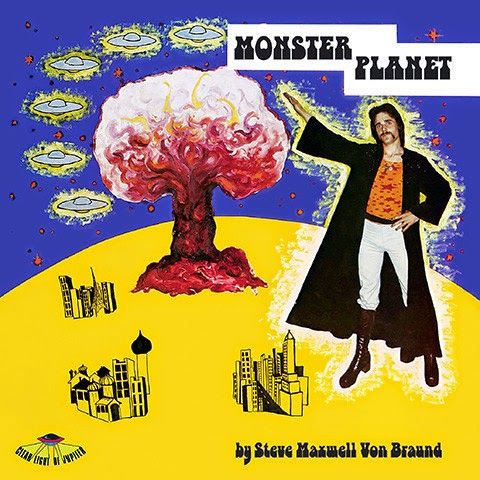 Maxwell lived in Germany and became fascinated with the German Kosmische movement. Upon arriving in Australia, he began a similar type of scene and started Cybotron who have a strong penchant for the mid 70's Tangerine Dream style. "Monster Planet" however recalls more the Cosmic Jokers "Planeten Sit In" album. The Von Braund album even uses the same day-glo blue and yellow colors of the Cosmic Courier clan.

it's time to highlight the highly lit sounds of Aussie space cadet Stephen Maxwell Von Braund. Mr. Von Braund's later activities in the more well know (relatively speaking) duo Cybotron would make him something of a name brand in cosmic synth circles during the 70's and 80's, but while Cybotron's arc went from rhythm boxed and Library-like confections to, latterly, hamfisted symphonic pounding, this first pre-Cybotron outing of Von Braund's (barring an anomalous but very Steve Hillage-like full band-abetted acid rock eruption on the first track) is mostly just signaling though the haze on the edge of time, with gurgling cosmic tides rippling past as attenuated synthetic strands coil off into infinity or churn menacingly in the foreground in a very Kraut-y electronic fashion.
Posted by Unknown at 11:56:00 PM