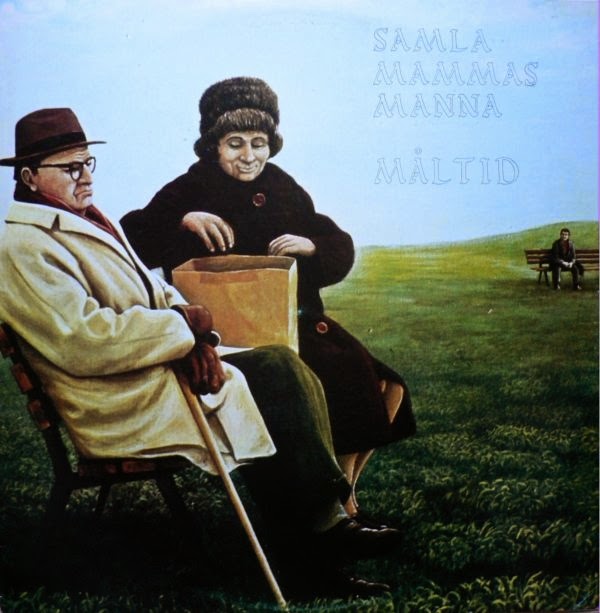 Second album from one of Sweden's craziest yet most enduring and most important band, Maltid is their most stunning album ever, no matter under which name the band will record. Some three years after their debut, SMM lost percussionist Oberg, but gained guitarist Coaste Apetrea, but this didn't alter much their direction, even if there were obvious sonic changes. Unlike its predecessor's and its chicken shack, Maltid was recorded in a real studio during the fall 73 and received a strange third-age picnic artwork (I think Maltid is meal time), which doesn't seem to be related to the tracks, at least not at first glance.

Starting out on some very obtuse bowels sounds (well, sorta anyway ;o), the quartet attacks their second opus on the almost 11-mins Dundrets Frojder, a constantly evolving track with some crazy percussions, weird vocals astounding overall musicianship and a Zappa-esque mastery and humour, but SMM has their own distinct sound. There is no way you could mistake it for Francesco, but it is damn well inspired, but never copied, as SMM is really giving priority to the instruments, as opposed to Frank's often too wordy musical scheme. SMM's vocals are often weird but actually closer to Focus than Zappa. Further down the album we have some really superb tracks like Oforutsed Folossning, some more experimental or dissonant Aterupplivate Laten, the burlesque and wordy Svackorpoangen and the slightly ethnic sounding Minaretten (with some incredible drumming) etc.. The mood always remain positive, humorous, joyous, even festive, that Maltid is actually fairly accessible despite its complexity, and I dare say that more than one prog-refractive should actually like this album, despite its left hand oddness.

This album comes with three bonus tracks, two of them from this same 73 session, and Circus Apparatha from the chicken shack sessions and the debut album. One of the tracks Minaretten 2 is absolutely vocally bonkers and it may introduce a certain reject reaction, but manages to blend in enough with the album's overall mass of work. Blending much better in (although you can hear the major production difference between the shack and the studio) is Circus Apparatha, while unlike the Minaretten 2 track, the final Probably should've made the original cut.

Knowing that SMM is one of the six original groups that will found the RIO movement in 77, they are the second oldest group (Stormy Six started recording in 69 but ahead of Henry Cow) and that by then, they'll have 4 albums, including this fantastic baby and its upcoming little sister Klossa Kuapitatet as pure Chef D'Oeuvre under their belt. This album can only be taken as a salutary musical slap in the face, no less, and assuredly the most important album out of Scandinavia. Well don't stand there, run for it.