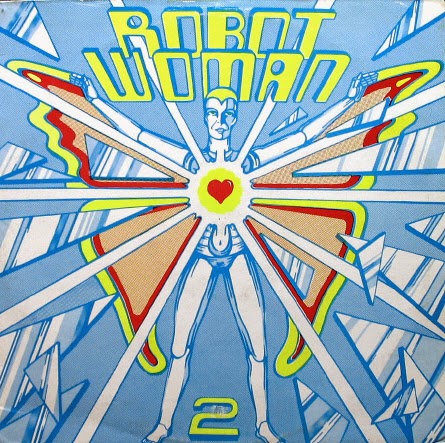 The original GONG, featuring Daevid Allen and his partner Gilli Smyth fragmented by the mid-70's, with drummer/percussionist Pierre Moerlen taking the band into jazzier realms. By the end of the decade, Gilli had formed a close relationship with another fellow musician, Harry Williamson, resulting in her parting with Daevid for some time. After cutting a solo album 'Mother' (which I haven't heard) she put together Mother Gong, a band continuing in a similar, quirky vein to Gong. Perhaps in reaction to the famed 'Radio Gnome' Trilogy, Smyth had constructed the 'Robot Woman' trilogy, stating her feminist viewpoints and response to all that 'Women's Lib' stuff. Musically speaking, the band featured such free-thinking, progressive musicians as Guy Evans (VDGG) on drums/perc., and Didier Malherbe (Gong) on flutes and saxes, with guests such as Steve Hillage and Hugh Hopper passing through the ranks.

Robot Woman 2 became increasingly 'new-wave' sounding, but still highly creative and fun, the music being more of a back-drop to Gilli's ranting, although if one has the patience to hear what is going on and how certain results are achieved, the music can strike you as being quite colourful and psychedelic. This is, of course, my perception - it has taken me many years to fully appreciate what this album has to offer The original vinyl LP contains a big fold-out poster which may be assembled into a comic book, explaining the story and concept in visual form. Whilst losing the edge off the first Robot Woman release, this 2nd installment is still a fine album which flows along smoothly and should appeal to the psych/space crowd nicely.