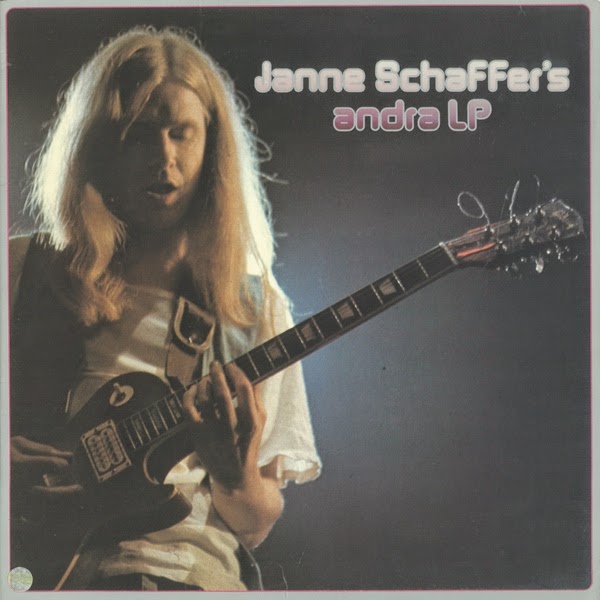 
Janne Schaffer's debut was commercially very succesful, despite being a rather uncommercial album.As the days of Baltik, Pop Workshop and Ablution were coming to an end, Schaffer, motivated by the success of his debut, focused on a personal career and in 1974 he released his second album ''Andra'' on Four Leaf Clover.Apart from the usual suspects Björn J:son Lindh, Ola Brunkert,Stefan Brolund and Malando Gassama, the album features also Pop Workshop's bassist Mads Vinding, J. Peter Robinson from Quatermass/Brand X/Sun Treader on synths and Ibis' drummer Petur Oestlund.The album was re-released the next year by Vertigo for the English market.

''Andra'' is another flexible album by Schaffer and the opening ''Dr Abraham'' might not be the best introduction with its overall funky sound, but the rest of the album contains few to none commercial vibes, though Schaffer's composing style is quite accesible.The album is dominated by the scroching, jazzy guitar workouts of Schaffer standing to his more bluesy and laid-back lines, all of them played with talent and passion.The rest of the instrumentalists actually define the style of the tracks.From the impressive flute parts of Lindh in the excellent Folk/Fusion cut ''Ugglor i mossen'' to the soaring moog solos of Peter Robinson and the congas of Gassama in the RETURN TO FOREVER-like ''Underhuggaren'' and from the rockin' style of ''Den gatfulla jungfrun'' with a very MARIO MILLO-styled atmosphere to the almost GARY MOORE-like ''Kulan vaexer'' and the excellent solo performance of Schaffer, ''Andra'' is full of jazzy-related textures with diverse ideas and strong individual performances.

Quite similar to the debut of Schaffer, ''Andra'' contains some very good, elaborated and refined Jazz/Fusion, pretty accesible but quite intricate at the same time.Another solid release by the Swedish guitar hero and certainly a recommended one.