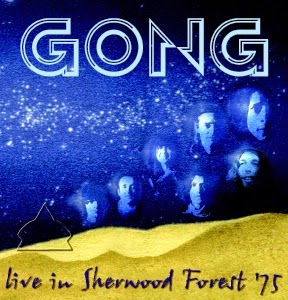 This is a pretty fascinating portrait of a band in transition:  Founding father, David Allen had recently departed and guitarist Steve Hillage was getting ready to follow suit, but the band was still featuring material from the final Allen era album, You, along with some tasty tracks from Hillage's soon to be recorded solo debut, Fish Rising, which featured many of the same players.  We also get some early versions of tracks from the forthcoming Shamal album, heralding their more prominent jazz fusion sound.

On the whole, the band is in good form here, loose yet tight, and the audio quality is decent for a lost archival recording like this, though not outstanding.  Some of the new material sounds a bit tentative, but the Hillage tracks are pretty confident an fully formed.  I'm docking this one half a star for Steve's unbearably daffy hippy chatter in between songs.  Maybe he felt like he had to step in and fill the void left by Allen's departure, though it's to his credit that he ultimately decided to honor Allen's original vision and strike off on his own, rather than continuing on without him.