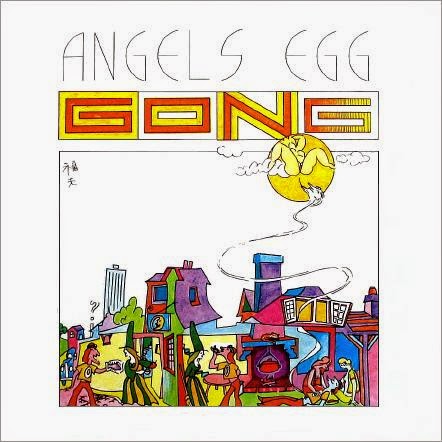 In this chapter of the greatest trilogy ever written, one finds Zero The Hero looking for ways to spread the good words taught to him from Planet GonG through this Radio Gnome Invisible, and he meets all sorts in that quest.

Angel's Egg sees two new members replacing Frenchmen Trisch and Moze: Pierre Moerlen and Mike Howlett and now the classic GonG line-up is present. However, unlike the previous Flying Teapot and the following You, the tracks here are fairly short (except for the opening track that clocks in at 8 min) barely exceeding 5 min at best.

Side 1 starts with a rare but superb almost-instrumental that is proof , if need be, that Gong is materful in all area including jazz-rock Canterbury style. All other numbers are very typical GonG athmospheres and climaxing in the Prostitute Poem where Malherbe answers so greatly to Gilly Smyth - delightful and dare I say Orgasmic. Only the drunken pub tune Givin My Luv sticks a bit out but it is short and can be easily skipped.

Side 2 starts with the real treasure of this album: it is the Flute Salad - Inner/Outer Temple suite only to be followed by concert fave Oily Way. Malherbe shows that he also masters the flute and the climaxes created is not only orgasmic but cosmic. Moerlen gives us a peak on future Gong music by putting in his great vibraphone playing in one of the last track. Many different facets of GonG are present in this album making probably their most impressive one ever.

Again for years the superb artwork sleeve had not been sufficiently respected, often suppressing most of the heavenly blue innerfold of the album. Charly Records via their subsidiary Victor label again released a mini-lp reissue (cat# 61173 , pricey but superb and essential for the understanding of this epic) and adjoining for the first time a booklet explainig the story and lyrics.