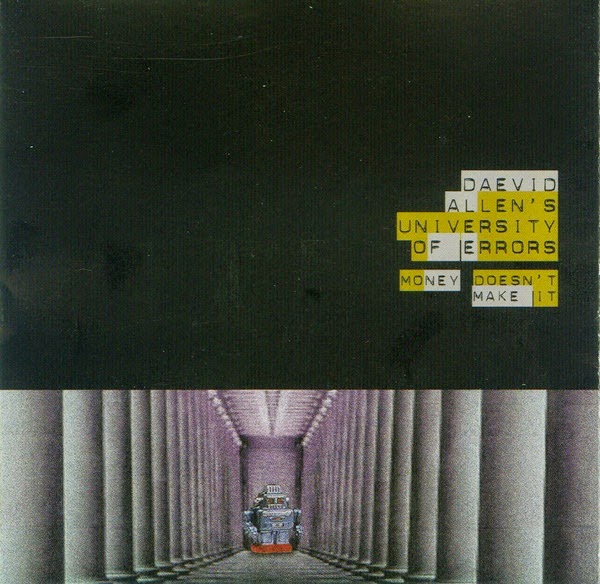 
Daevid Allen's UNIVERSITY OF ERRORS started back in 1998 when, after touring the USA, Allen played some studio jams in San Francisco with the spacey improvising band MUSHROOM. It wasn't intended to be recorded, but the good relationship among the different members and the great musical result ended in the recording of the first record, 'Money Doesn´t Make It'(1999, Innerspace Records). The original line up consisted of Daevid Allen on vocals and guitars, guitarists Josh Pollock and Erik Pearson, keyboardist and synthesist Jay Radford, bassist Michael Clare and Patrick O´Hearn (credited as Pat Thomas) on drums. This line up would tour the USA and record another album, 'e²x10=tenure' (2001, innerSPACE 7715), which was also edited as a special limited edition through GAS before its official release.

After this record there would be some changes on the original line up, because Jay Radford left the band and Patrick O´Hearn and Erik Pearson decided to concentrate on MUSHROOM. The band recruited Jason Mills to continue touring, whose contribution is well documented in the live recordings 'Go Forth and Errorize!!!' (later released by Voiceprint on the Bananamoon Obscura series as 'Live in Chicago') and 'Live at Schubas', privately made CDRs that were sold on the 2002 gigs. They would also record the third studio album, 'Ugly Music For Monica' (2003 weed 7912), which featured PERE UBU´s keyboardist Tony Maimone.

Another line up change occured when Jason Mills decided not to tour Europe to concentrate on his band BEETROOT, so the band recruited drum instructor Warren Huegel. By the end of the 2003 tour the band abridged the name to be called simply UNIVERSITY OF ERRORS and recorded 'Jet Propelled Photgraphs' (2004 Cuneiform Records Rune 188), a collection of the early SOFT MACHINE songs and other songs from the period in which Daevid Allen was originally involved in the late 60's. In November 2006 the band played at the Gong Unconventional Gathering in Amsterdam, and the concert was filmed and recorded for the DVD release 'University Of Errors Play Soft Machine' (Voiceprint unGONGDVD001), which has been their last release to this date.

The first effort of the union between Mushroom and Daevid Allen is a collection of improvised music that evolved into a collection of songs thanks to the lyrics added by Daevid Allen. Those willing to listen to a typical "Gong meets Mushroom" record will be disappointed, because the music isn´t related at all to their funky fusion experiments and it sounds much darker, but also full of musical contrasts, humour and criticism.

From the funny "Money Doesn´t Make It", with its interesting hypnotic intro and a superb work on guitars, you know you are going to listen something very different of what you expected. The improvised nature of the record is clearer in songs like "Prince of the Sidewak Scooter", almost recitative at the beginning, but that turns into a jammy spacey song full of the typical guitar gliss, and "False Teacher", a delicate but really mysterious track, in which Erik Pearson´s flute gives it an eastern sound that will appear again in "Mullumbimby Mother", that reminds me some of the raga-like music they had previously played in their respective bands.

Unfortunately, from this time the rest of the songs seem to be only short sketches of what they had been playing in the studio (in a similar vein as Fred Frith´s "Speechless"). Although these are not obviously the best tracks of the record, they can give you an idea of what they had been playing and how they would sound like when pushing their music to the limit ("Cunning Style Construct", which really sounds like a free improvisation, and the joke of "Wedding Music", are great examples of their out-of-limits performance). The most remarkable songs are "Prof. Improbable´s Preambule", very experimental and with an acid flavour that sticks it hard in your mind, specially by the metronomic percussive sounds, and the crazy reprise of the first song, "Burn Your Money", which could be the perfect final for the record.

Despite not being a perfect record and having some flaws, the overall result is at a high level and I think it deserves a listen, noy only for the great musicianship displayed, but also because you can discover another side of this versatyle artist named Daevid Allen.
Posted by Unknown at 10:06:00 PM