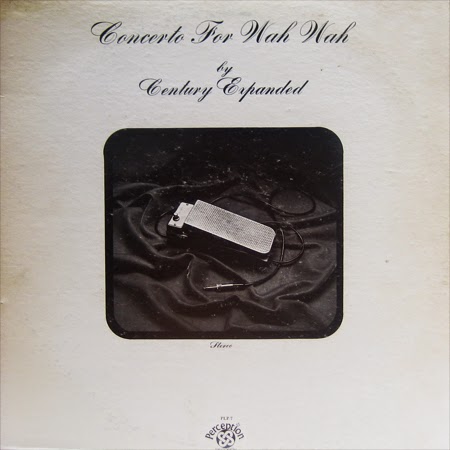 
Invented in 1966, the wah wah pedal became a key device in forming and shaping the structure of many a rock song. Primarily employed in a hard and heavy context, the innovative gadget defined such a genre at the peak of its popularity, which was obviously the late sixties and early seventies, although a number of guitarists still utilize the apparatus today. The name of the pedal stems from the fact it sounds like "wah wah" when doing its thing, and allows the six-string slinger to effortlessly create interesting colors and tones.

MONSTER rarity here, kids - I've been searching YEARS for one of these and started to even doubt its existence.  But here it is - (almost) completely unknown, definitely un-reissued officially and it shows up about as often as Halley's Comet.  From 1970, on Jimmy Curtiss' (The Hobbits) Perception label, a group of individuals known as Century Expanded devoted to the sounds produced by the wah wah pedal produced this extremely specific and ultra-mind-expanding cosmic trip-out that sounds like a lost Pink Floyd album somewhere between SAUCERFUL OF SECRETS and UMMAGUMMA.  No one knows WHO is behind Century Expanded (other than Jimmy Curtiss, who wrote the songs), only a mysterious "J.M.P." who wrote the liner notes.  There are only three songs on here, two over 10 minutes each, given "serious" titles like "Melodic Variations In D Minor," "Rhythmic Variations in E Major" and "Prelude," which, ironically, is the LAST song on the record, ha ha.  Or should I say "wah wah."  "Melodic Variations" kicks off with a heavy, doomy monster riff very similar to the Beatles' "I Want You (She's So Heavy)" drenched in wah wah guitar.  Then, after about 7 minutes, we launch into a trippy dreamlike bridge sequence, all backwards tapes and "Rain"-like lysergia.  Then, the heavy riff returns again, this time given an acid-coated liquidy effect, somewhat like David Gilmour's treated guitar from the intro to "The Narrow Way" off UMMAGUMMA.  Side 2, otherwise known as "Rhythmic Variations in E Major" to you classical wah wah buffs, starts out with some discordant violin (probably run through a wah wah pedal no doubt), until a Jimi Hendrix inflluenced acid guitar kicks in.  Therein follows tons of wild, flying cosmic guitar licks, outer space keyboard effects a la Rick Wright and galloping tribal drums.  It's clearly an attempt to create their own "Interstellar Overdrive," and it's a darn good one.  I can't imagine how many record shops back then filed this one away in the "classical" section, based on the stodgy cover and the even stodgier song titles.  Only if you spun this would you realize just what an acid-drenched psych-o-delic monster it really is.  I've seen this selling for $750 online, no kidding, and that same website now lists it as "SOLD."  For the right acid head, this is clearly gold.
Posted by Unknown at 6:16:00 PM