Bullet
1970
The Entrance To Hell 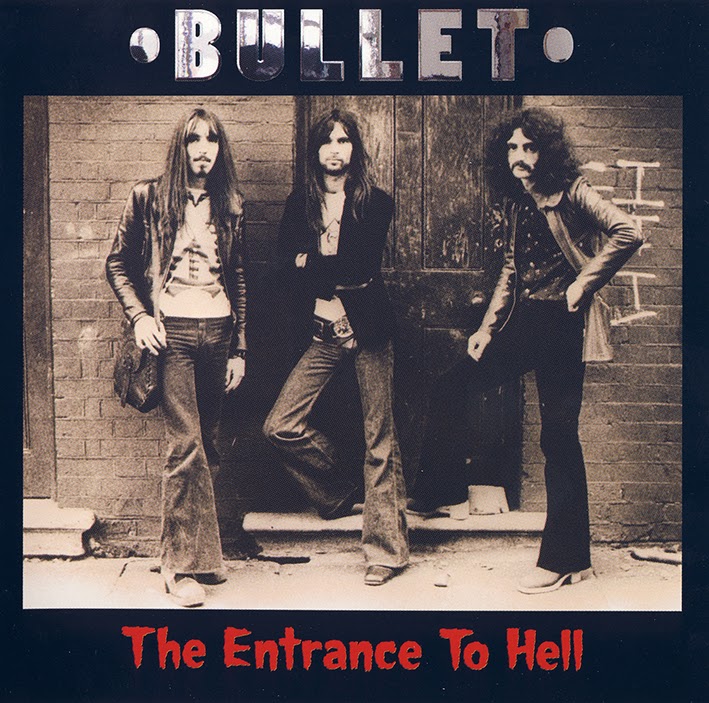 Oh what a tangled web record companies weave, sucking every last drop out of record buyers. The history of this band isn't that convoluted but bears some clarification, not least to prevent the consumer buying the same product a number of times. This band evolved out of the ashes of the recently broken up Atomic Rooster, with Paul Hammond and John Cann (later DuCann) joining forces with ex Quatermass bassist, John Gustafson. Daemon never released an album but quickly morphed (for reasons unknown to me) into Bullet. They added a singer, Al Shore, and toured as support for Deep Purple in 1970 or 1971, when I saw them live. Bullet released one or two singles but then discovered there was another band of the same name, I believe from USA, who possibly (?) threatened legal action. They then became Hard Stuff, who released two albums.

This Daemon collection, amounting to more than a vinyl LP, is what became the Hard Stuff album "Bulletproof". Some of these tracks, for obvious reasons of time limitations, didn't make it onto either of the Hard Stuff albums. Some of the ones that did are identical and a couple have slight changes, possibly where they were re-worked without Al Shore. Some also have different track names but contain the same music. A word of warning, although it adds to the merits of buying this album if you already have the "Bulletproof" issue, is that some of the "identical" tracks to the ones that appear on "Bulletproof" are not exactly the same, however, as we have some subtly different mixes. Now, to top it all, the record companies pull out their final trick. They have released this entire album, I believe on a track for track basis, under the name Bullet and, surprise surprise, they neglect to mention this fact on the cover! Funny that! I have not heard this later issue and, therefore, cannot comment on the relative differences of audio quality.

That's the background but what about the music? Having seen them live, as stated above when they were still Bullet, I was a fan from the off. The final released version of the "Bulletproof" album has long since been a favourite album of mine and this is all that and more so it has to be a winner...doesn't it? Well yes and no (although it's not much of a "no"). Some of the tracks left off "Bulletproof" are not quite of the same high standard and do sound like out-takes. Where it does get interesting is the much longer version of "Jam: The Provider", here stretched out from two and a half minutes to over seven. It was a great track on "Bulletproof" and I always wanted it to go on longer. This is one of those times, rarer than hen's teeth, where I got my wish granted!