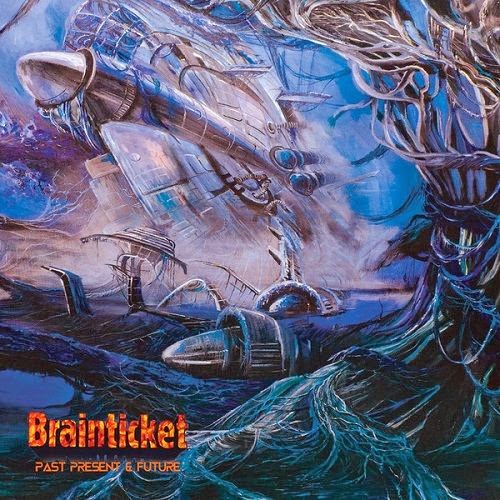 I just knew a new Brainticket album would come my way. After all there was the Space Rock Invasion tour that included them, Huw-Lloyd Langton (ex-Hawkwind), and Nektar, so it was time a new Brainticket album came our way. After all 15 years passed since the last one, Alchemic Universe, while welcomed by many, many did not take to well to its techno leaning. I'm happy to report with Past, Present & Future, the techno approach has thankfully been ditched, in favor of real drums, again! Members of Die Krupps, UK Sub, and Nik Turner's band, and local musicians from the Oakland, California area, are in this version of Brainticket, along with (naturally) Joel Vandroogenbroeck, now 76. The album was recorded mainly in Oakland, but also parts of it in Pinar Studio, Joel Vandroogenbroeck's home studio in Mexico (where he's resided since 1984). It's Brainticket, I hear elements of the Brainticket of old, like Cottonwoodhill, Psychonaut, and Celestial Ocean, but they don't rehash that, and bring in something new as well. I also love the production, no loudness wars that make listening a headache regardless of quality (go listen to Eloy's The Tides Return Forever or Ocean 2, great music, but that loudness war makes listening to them a headache due to unnecessary volume). Also the fact the music doesn't sound overly contemporary, but not overly retro either (I do hear both analog and digital synths). Kyrsten Bean (I believe) sounds so unbelievably like Carole Muriel you'd think it was her under an assumed name. Just one listen to "Dancing on the Volcano Part 1" or "Egyptian Gods of the Sky" and you'll see what I mean! "Dancing on the Volcano Part 2" features an extended funky jam that gives way to an ambient part, and some nice flute playing from Joel Vandroogenbroeck. "Reality of Dreams" has a more Eastern feel to it, complete with sitar. A couple cuts venture more into '70s-like prog instrumentals like "Reality of Dreams" and "Proto Alchemy", while "Egyptian Gods of the Sky" will remind you of Celestial Ocean with the spoken dialog and Egyptian theme. Then there's "Brainticket Blues" I get a kick off! Blues does Brainticket style, you will never mistake this for BB King or Muddy Waters. First you have Joel Vandroogenbroeck's flute playing. Then you have Kyrsten Bean's spoken dialog sounding like Carole Muriel, and it sounded like it was lifted right off Celestial Ocean. You obviously hear the blues style, but nothing like regular straight-up blues (which usually bores me). Usually Brainticket takes themselves seriously, but "Brainticket Blues" shows that rare not-so-serious side. To see 2015 gets started off with some this good, I'm happy to see a new Brainticket album. Just what I needed, and if you like Brainticket, this one should be in your collection.