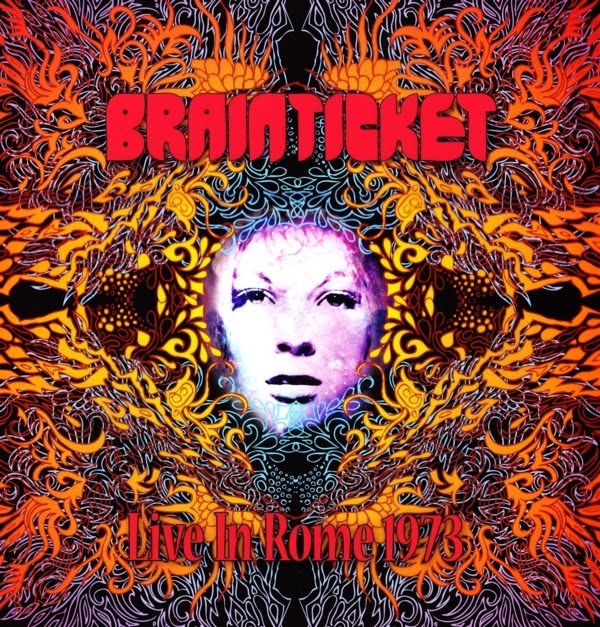 
BRAINTICKET are considered primo, brain-frying Krautrock pioneers coming from, of all places, Switzerland. Indeed, the debut album, 'Cottonwood Hill', is a freaked-out piece of relentless Psychedelia that needs to be heard to be believed, with their 2nd album 'Psychonaut' being an improvement (or a down-step, depending on your POV) - more refined and focussed. Moving on, 'Live In Rome '73' was taken from a gig based on their 3rd album, 'Celestial Ocean', and, what we have here may be a memorable gig for sure, but the sound quality is that of a half-decent audience recorded bootleg, which tends to marr the overall enjoyment for many (myself included), but it is always a welcome listen just to hear such an obscure band in a live environment. The line-up consists of main-man Joel Vandroogenbroeck (keys, vocals, flute, sitar), Barney Palm (drums, perc. vocals, effects) and Carole Muriel (vocals, synth, zither), and, despite lacking the bottom-end 'oomph' of a bass guitar, they put on quite a good show. Highly experimental in nature, we are treated to many spacey jams and improvised segments (Intro, Jams 1, 2 and 3, Era of Technology) along with some of their more impressive and arranged tracks - Egyptian Kings is a fantastic highlight here with a great, main riff driven by synth, Muriel's ooh's and aah's and kozmik ramblings and a mighty Hammond solo from J.V. The two longer pieces - Jardins/Rainbow, and also To Another Universe/The Space Between showing off a more typically Krautrock inclination - highly acoustic parts with Palm's creative and inspired hand-percussion, uncredited guitar (?) and more of Muriel's narratives, blending into synthesised experiments and mesmerising drones powerful enough to drag the listener into their universe. Indeed, this recording is no starting place for the uninitiated, but those familiar with this highly interesting band may appreciate an all-too-rare live document, which happened to be made commercially available, even as a gatefold LP with a different cover-art.