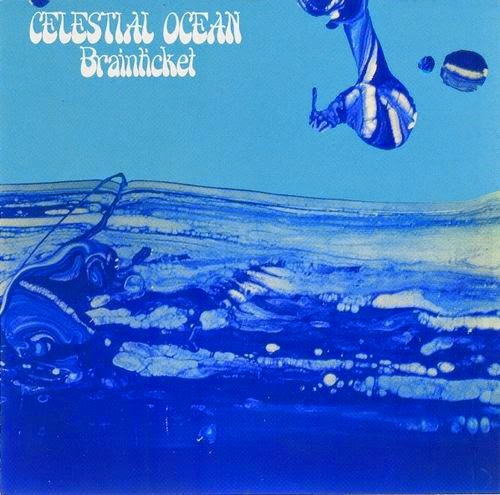 
BRAINTICKET's third release finds the band stripped down to a trio. We get a different female vocalist for the third album in a row in Carol Muriel who also plays synths and zither.

The album starts off with my favourite BRAINTICKET track "Egyptian Kings". Everytime this song came on at work this week it had my full attention. It's one of those songs you hit the repeat button for when it's over. It starts off with some intricate sounds and lots of atmosphere. A full sound arrives a minute in. Male and female vocals are spoken. Low end guitar, organ, flute and drums lead the way. It has such a groovy, addictive rhythm. The organ before 5 minutes has a Canterbury flavour to it. "Jardins" features zither throughout, sounding a lot like a harp actually. Female vocals are spoken. Acoustic guitar and flute add to the sound. It blends into "Rainbow" where we get an Indian flavour added. The sound builds after a minute. Spacey synths all by themselves after 2 minutes to end it.

"Era Of Technology" opens with organ as we get more spoken words all speaking at once. No real melody until drums come pounding in at 1 1/2 minutes. Cool sound as spoken words continue.The song changes completely 5 minutes in for the better. Flute, zither, vocal melodies and percussion fill out the sound. "To Another Universe" opens with what sounds like vibes as percussion comes in. Synths and some catchy organ (later) create the sound. It blends into "The Space Between" as spoken words join existing melody. Words stop after 2 minutes. Synths and percussion to end it. "Cosmic Wind" is a very mellow and spacey song. Big surprise given the title. Zither and flute lead the way. Strummed guitar arrives 4 1/2 minutes in. "Visions" features some beautiful sounding piano melodies for 2 1/2 minutes. The tempo then picks up as percussion is added. Synths 4 1/2 minutes in. It ends with male and female vocals saying "Egyptian kings" over and over with a spacey background.