Agitation Free
1998
At The Cliffs Of The River Rhine 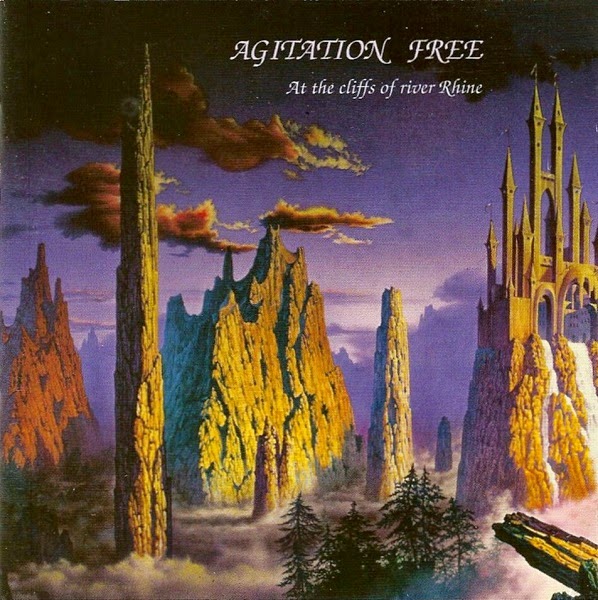 Although AF inherited a major status in Krautrock history, their historical output was only of three albums, which is quite few compared to ADII, ART, Can, Kraftwerk, Embryo etc. But 00's, AF's total official output includes at least that many posthumous releases, of which At The Cliff Of River Rhine stand as the only one as essential and the only live album, which allows to think more could be heading our way, for there were lots of their gigs recorded. The Cliff part title does provide some confusion though, as it might hint that this record might have been recorded on the romantic Rhine (Koblenz to Mainz), at say Lorelei or something. .. But no, if indeed the live setting did happen in the Rhine valley, it was in Cologne, where the river lies calm and flat in what we can barely still call a very wide valley and there is not a cliff in sight for 100 km. This leaves the title taking inspiration on a cool-looking artwork that seems to inspire itself on the fantasmagoric world of Roger Dean. However these tracks had seen a previous release on Cd in a bootleg form under the title "At Last AF Is Free", because the concert had been a WDR radio broadcast.

This recording however is absolutely pristine and probably one of the best I've heard (apparently no overdubbing either) and it came a few months after the release of their second album (which explains the predominance of tracks of that album in the concert). Sonically very similar to their Second album, and still retaining the ABB edge of that album (there is a tracks that very reminiscent of "in memory of E Reed"), due to their double drummer attack of the previous year (yet un-documented), their usual twin guitar turbo drive (Ullbrich & Lutjens) and Hoenig's particularly superb electronic burbles (amazingly clear & audible for this live setting), etc.. No one single glitch on the whole 47 minutes of the broadcast. Not all that essential a posthumous release if you own their Second album, but if you're an AF fan, you'll know you'll need this.