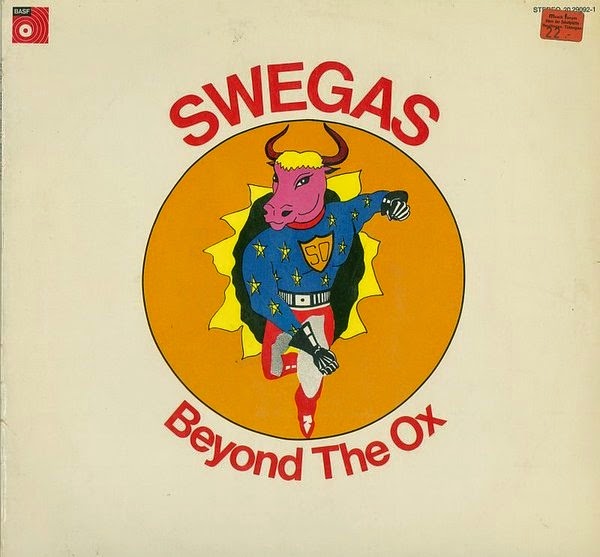 SWEGAS were a British 'progressive' brass-rock band that existed between 1969 and 1971. They played all the major venues in the UK and made several tours of Italy and Germany where they were extremely popular. The name of the band is derived from an Anglo Saxon word for music.

Swegas began life as a rehearsal band in 1969. They were put together by Brian (Joe) Spibey and Nick Ronai who had been members of the Fulson Stilwell Band before joining the soul band, Cat Road Show. The original Swegas band consisted of Joe Spibey (trumpet), Nick Ronai (trombone), Alan Smith (Tenor Sax), Jonny Toogood (guitar) plus a few pick up players. Mid 1969 they advertised for an Organist and Bass Guitarist and Keith Strachan and Roy Truman applied and got the gig. They had been playing together in various bands since being at college together and were looking for something a bit more adventurous. They found it in this band which were beginning to fuse Rock and Jazz in the manner of Blood Sweat and Tears and The Chicago Transit Authority who were in their early stages of development. They rehearsed originally above a pub in Acton (The Kings Head?) but later in a basement of a cafe in Fulham Palace Road (about no. 201)

Undeterred, Keith, Roy, Nick and John recruited Stewart Wilkinson (guitar), Ron Shillingford (tenor sax) and Maurice McElroy (drums) and managed to get a deal with First Class Management. Barry Class bought the group a tour bus (at their suggestion) but the insurance and hgv licence issues not to mention the parking problems in Soho soon put paid to that idea and the bus was exchanged for a Ford Transit minibus and a Transit van.

With their new line-up the band rehearsed endlessly on new material in a room at the London Ambulance Service  in Waterloo Road. They signed record and management deals with the Barry Class Organisation in March 1970 and during this Spring period of 1970 they had a regular spot Upstairs at Ronnie Scotts - Swegas one night - Genesis the next! They then embarked on a three month tour of Europe starting in Oslo on May 20th.

They travelled to Gothenburg from Felixstowe by ship on 17th or 18th May. They were in Oslo till the first week in June then travelled to Zurich for one week. They then left Zurich for Munich on Mon 15th June and ended up in Hamburg in July. The blue mini bus was breaking down continually and through lack of money spent a number of nights sleeping under the vans. They ended up in the famous Top Ten club sharing the bill with the Boston Show Band (featuring the then unknown Gary Glitter). They liked their drummer Billy Hogan so when Maurice left shortly after Billy was offered the job.

When they arrived back from Germany in July they went into the salubrious Tangerine Studios in Dalston to record the Child Of Light album. Maurice was still playing drums at this point.

More gigs followed around the UK then in September 1970 the group returned to Europe for a few weeks to play in Turin & Rome (The Titan Club). Chris left shortly after and was eventually replaced by Lennie who joined the band in December. Swegas returned to Italy again in Jan 1971 and played a few open air concerts in Bavaria.

The second album Beyond The Ox followed in early 1971 and was recorded at Command Studios in Piccadilly.

Things started to go wrong in mid 1971. The band bus (a blue transit) suffered a collision in Hamburg and it was a virtual write-off. The writing was on the wall and Barry Class and First Class Management pulled the plug when the band returned from Germany.
Posted by Unknown at 6:42:00 PM

Email ThisBlogThis!Share to TwitterShare to FacebookShare to Pinterest
Labels: Swegas