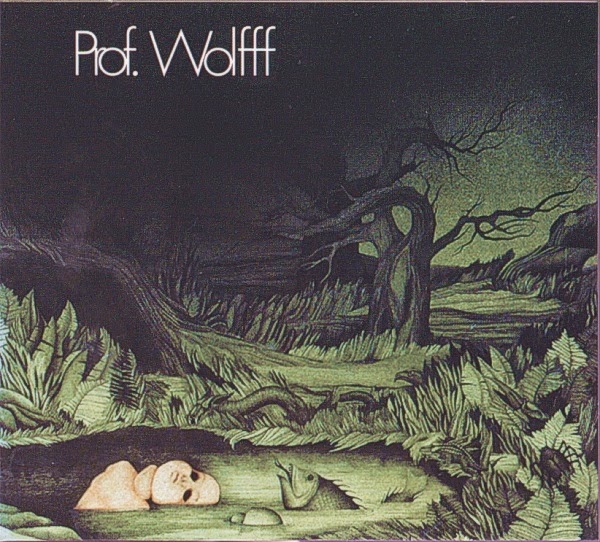 
PROF. WOLFFF, a german band from Ulm, started in the early 70's and unfortunately produced only one album. Remarkable is the use of lyrics in german similar to FLOH DE COLOGNE. Despite that the band never had a political approach the lyrics are provoking a lot though trying to digest the rebellious times in which they lived. This is combined with the typical mix of blues, folk and psychedelia which can be also defined as krautrock. As a result, other musicians must have been inspired for sure to compose rock songs using the native german language. The band was busy with gigs all over germany and also had a TV appearance.

The first line-up consisted of Klaus-Peter 'KP' Schweitzer (guitar, piano, vocals) who basically managed the songwriting, Rolf-Michael 'Romi' Schickle (organ), Detlev 'Mondo' Zech (bass), Michael 'Sam' Sametinger (drums, percussion) and Friedrich 'Fritz' Herrmann (guitar, vocals, harmonica). Where does the obscure band name come from? It's pointed out somewhat legendary, mysteriously. One of several possibilities: Schweitzer was sitting in a cafe and asking the waitress for the name of a unrefined looking man. The answer was: "Prof. Wolfff" and he spontaneously decided to use this label.

PROF. WOLFFF recorded its self-titled album in October 1971 at the Jankowsky studio, Stuttgart. It was produced by Jonas Porst, the manager of IHRE KINDER. The original vinyl release contains 5 songs whereas two of them nearly reach the 10 minute mark. Raw guitars and prominent hammond organ like PROCOL HARUM or DEEP PURPLE give a heavy rock appeal. On the other hand you can find two folk songs with chorus vocals as well as classical motifs which are making this album unique as a whole. The Second Battle CD reissue from 1998 also contains the shortened radio mix of the song 'Hetzjagd' as a bonus. Some months after the release the band split unexpectedly. One reason was that Mondo Zech had to join the civil service.

Fritz Herrmann changed to the bass and moved on together with Romi Schickle under the new name PROF. WOLFFF ENSEMBLE. Musically remarkable is the reorientation at instrumental jazz rock. Peter Bochtler played the drums furthermore with the support of several guest musicians until Detlev Joe Rodius (guitar) became a constant member. The band toured until the disbanding early 1974 but never produced a release at all. PROF. WOLFF has been brought to life once again in the second half of the 70's by Herrmann who went to Munich and gathered several musicians of the local scene (MISSUS BEASTLY, MUNJU, EMBRYO) to play improvised jazz rock/fusion. The final split took place in 1982.

PROF. WOLFFF's self-titled album is technically impressing. The songs have been recorded in 1971 at the Jankowsky studio, Stuttgart, produced by Jonas Porst who also was the manager of IHRE KINDER. You can explore excellent heavy blues rock with folk and psych contributions dominated by a prominent Hammond organ. The band members have been pioneers using strong political lyrics in german. Sometimes music and texts seem to be very contrary - but on the other hand this makes it very unique. Remarkable are also excellent vocals which was not taken for granted based on german bands. Distributed by the Metronom label in 1972 this album is one of the rare searched vinyls of the german progressive rock history.

The first and the last song are musically remembering at DEEP PURPLE and VANILLA FUDGE in parts. The dramatical Hetzjagd is about hunting in general. The calm sections are accompanied by a decent organ but the vocals are not always clear enough to catch though. 'Nobody thinks of the victims' - it's ambiguous - probably a metaphor about attacks against dissidents. Weh Uns is provided with heavy lyrics describing war respectively disease victims. Very provoking and hard to digest especially for german people. The last two minutes of the song are even a great dissent - a happy flavour tendered by acoustic guitar and organ competes with hard words on the other hand culminating in a sweeping blow. 'It will happen if you don't say NO' - a numb robotic voice is offering a flaming appeal to prevent the end of the human race.

Hans im Glück is a very interesting interpretation of the eponymous german fairy-tale, in a modern editing though. My highlight because music and lyrics are in a perfect unity. Missverständnis follows, a lot more folky with acoustic guitars and bongo percussion. The band picks up the story of Jesus and is leading over to the political situation in germany afterwards using the example of the capture and dead of a communist. Das Zimmer is also provided in a light and folky mood with a decent flute whereas the prof is criticizing the bourgeois who are comdemning and excluding the young generation.