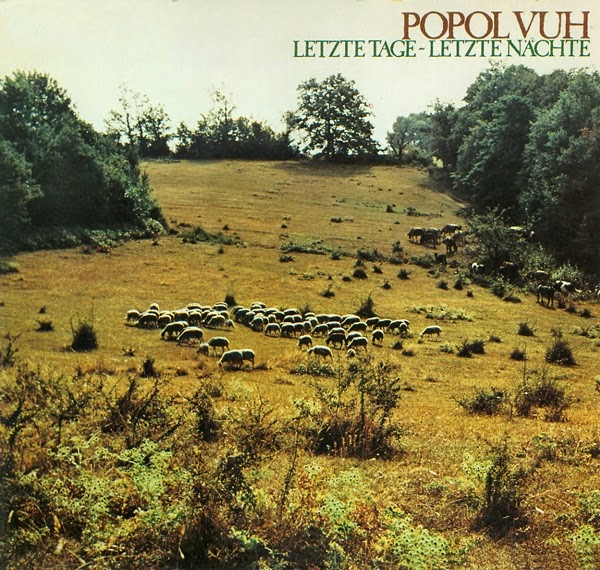 
This album is probably the closest that Popol Vuh came to straightforward rock music. The sound is dominated by Daniel Fichelschers electric guitar and drums, and there are none of the ambient, meditative pieces that they did so well on other albums. Fichelscher also gets writng credits on no less than 3 of the 8 tracks. The mood for the album is set by Die Grosse Krieger, a multi layered guitar instrumental that matches King Crimson's Red in intensity (although not virtuosity). Most of the tracks which follow are built around the same electric guitar sound with booming percussion - Fricke's piano is rarely audible, and there are no acoustic interludes. Despite all this, it is still recognisably a Popol Vuh album. The guitar may be a Telecaster, but it explores Eastern modes and scales, and the drums may be heavy but we're still a world away from John Bonham or Keith Moon. The vocals, particularly on the second half of the album, are inspired - Fricke's choirboy tones blend beautifully with the two female sopranos on 'Haram Dei...' and the title track.

The fact that this album will fit comfortably onto one side of a C60 may seem like poor value for money, but quality is as important as quantity and Popol Vuh cram more into 30 minutes than many lesser bands do into a double album. Not the best place for newcomers to start, but an exsellent addition to any collection.
Posted by Unknown at 2:01:00 AM