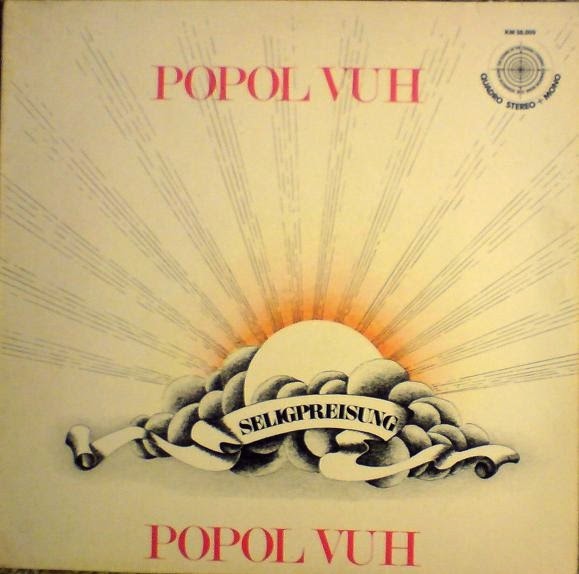 
Great to hear Conny Veit from GILA playing guitar on this one. Florian played on "Bury My Heart At Wounded Knee" by GILA which was released the same year as this album.This record is the first with Daniel Fischelscher on board, the former drummer for AMON DUUL II, here he drums and plays guitar. Robert Eliscu from BETWEEN adds aboe. Florian would do all the vocals on this one, although there are few. The title of this album means "Songs Of Praise". The players become shadows as it were, so we can all be drawn to God. The music is mainly aboe, guitar and piano melodies.This is the first POPOL VUH album that I ever heard, and having 12 of them now I still feel that this is the best one. It's the one that moves me the most and the one that is the most beautiful.

"Selig Sind Die, Die Da Hungern" opens with piano and cymbals as aboe and reserved vocals come in. I really like the sound after a minute. Percussion comes in. Guitar and drums 3 minutes in. I'm smiling. An absolutely gorgeous track. "Tanz Der Chassidim" opens with a pastoral soundscape that is replaced by a beautiful and fuller sound. Guitar before 2 1/2 minutes to the end. "Selig Sind, Die Da Hier Weinen" opens with piano and aboe. The piano becomes more prominant a minute in then gives way to the aboe. This is moving. The tempo picks up after 3 1/2 minutes as drums and guitar come in. Nice. Vocals 4 1/2 minutes in.

"Selig Sind, Die Da Willig Arm Sind" opens with a dark mood. It brightens as piano, guitar and percussion come in around 1 1/2 minutes. "Selig Sind, Die Da Leid Tragen" opens with ethnic sounds before piano and vocals arrive. Aboe and piano create wonder. Drums follow then the aboe takes the lead as vocals and piano return. Amazing ! Florian starts to sing "Hallelujah" repeatedly. The tempo picks up before 3 minutes. Nice guitar. "Selig Sind, Die Sanftmutigen" is simply transcending. Florian sings Hallelujah over and over as piano and aboe help out. Did you know that Hallelujah means "Praise God" and is the only word that means the same thing in all languages.This is so moving. "Selig Sind, Die Da Reinen Herzens Sind" is mellow with piano and aboe. Vocals come in. It blends into "Ja, Sie Sollen Gottes Kinder Heissen".This does become fuller sounding as drums and guitar join in the celebration to God. The bonus track "Be In Love" features Dyong on vocals and we get some guest violin too.This perfectly fits the theme of this album.

This is one of those rare albums that is able to transport me to a beautiful place. Gorgeous and emotional.Thankyou Florian.