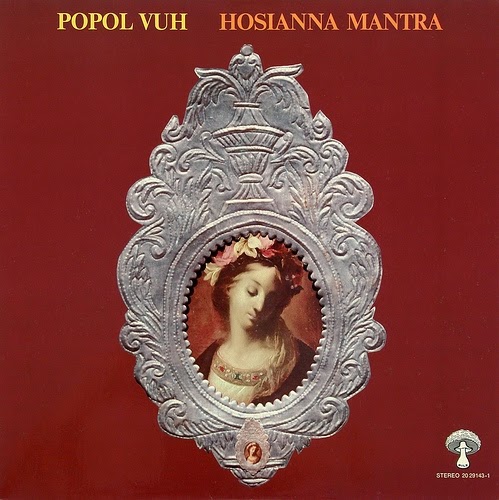 
This album has grown as one of the most affecting and memorable recordings I tend to listen. Its spiritual approach accepting all religions as different manifestations of the same search of sanctity fits to my own tolerant quest of acceptance, and the beauty of ambient textures from acoustic-emphasized instruments glorifies the yearning for tranquil ecstasy, carved firmly on the other side of the coin for political misuse of religions trough superstitious masses.

The sides of the LP form two musical entities, which movement's names are familiar from the Christian lexicon of classical European works, uniting here with global hippie philosophies of meditative musical idioms. "Hosianna - Mantra" starts gentle waves from piano, subtle guitar notes and oriental-toned tambura strings, this setting the scene of cross-cultural viewpoint and spiritual essence of the record clear from the start. Momently cascading piano streams of golden light stir movement to the sacred cycles of this musical prayer, which mostly lingers in the silent corridors of protective monasteries and nature's hideouts from man-created evil. The second movement "Kyrie" is really memorable moment of peace on the record, allowing Conny Veit's delicate guitar weeps and Djong Yun's ethereal singing unite as angelic whispers from tranquil eternity, culmination to ascending melodic progression of salvation. This sequence was also filmed to television, on my understanding as overdub, but however allowing interesting visions from the musicians at their creation environment. Florian Fricke's calm piano lingering reminds the lovely calmness of Bill Evans playing style, yet dissolving to ever more vastness of mental quietude. The main sequence of the three parts spin the mantra of faith residing in the lap of the gods, piano weaving the dynamics for the background movement, giving space for a lovely guitar and oboe solos, vocal adorations and incense-smelling shades from other supporting acoustic instruments. As an artistic creation this work really convinces with the capabilities of reaching sacral resolutions by combining traditional high cultural and modern underground methods. Possibly the purity of aims is more meaningful than the doctrines of expressional instruments.

The second side of the LP is named based on my understanding by the Deuteronomy of Moses. Even though the commandments of this scripture contain many strict codes, it also by my inferior interpretation deals with monotheistic idea of god's simultaneous existence everywhere. This aspect could be seen from broader objective perspective suiting to the acceptance of global deistic panorama of these charming musicians gathered at 1970's Munich playgrounds. From the movements, "Abschied" follows the paths of a tender hymn lead by oboe and guitar, illuminated by enigmatic tambura chords. Very operatic vision, which melody dramatics flow in vein of 17th century European music. "Segnung" blends to these motives more trance-oriented long vision to the horizon, focusing for both lovely soprano voice and guitar notes on this broad view, decorated by myriad oriental tonal ornaments creating most enlightening musical scenery. On the later parts the melodic themes are studied with broader instrumentation and joyful pace creates more solid form trough the rhythm. Surrounded by meditative sound carpets of "Andacht", "Nicht hoch im Himmel" continues with passive straits resembling classical music emulating third stream jazz, which I got familiar from ECM record's, shimmering this emotion-affecting void. Piano and emphasis on guitar gains strength in the later moments, which give me also associations from holy emptiness of Giya Kancheli's "Exil" work, also released through the prolific German record mentioned. "Ave Maria" concludes the album by summing the album's melodic potential for beautifulness, classical music forms contrasted with table-drums and strengthened with a violin. As a whole both sides create a personal culmination point of sacred art music which I would recommend for anybody as a masterpiece of spiritual music sensation, not being difficult to follow, nor lacking artistic content.