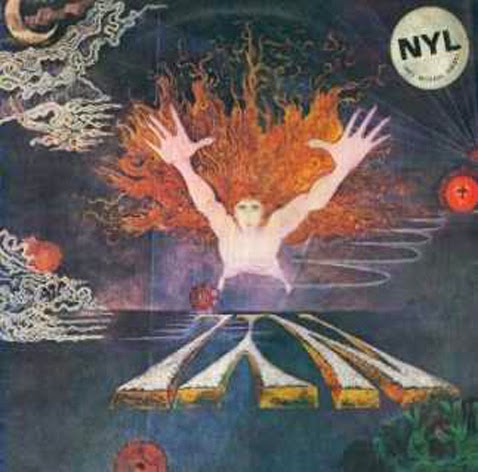 
NYL, a French rock commune, were naturally but intentionally formed around Michel PETEAU by lots of musicians, soon after he disbanded Cheval Fou. According to their information, the personnel were Michel PETEAU (guitar), Stephane ROSSINI (drums,voices), Jannick TOP (bass; already recorded also Udu Wudu with Magma), Patrick FONTAINE (bass), Olivier PAMELA (bass and voices), Elisabeth WIENER (voices), LOY (piano), D.B.F. (synthesizer), FREEQUENTIN (alto saxophone), Ariel KALMAR (soprano saxophone), and Bernard LAVIALLE (guitar). They gathered themselves for recording live material in a studio and this could be crystallized as their only one eponymous album released via Urus Records in 1976. Fabrizio Di Vicino (Psych Up Melodies) says Richard Pinhas might publish the issue because of a phrase "Thanks To Heldon" written on the rear of the original LP. It's said they were disbanded soon after the session sadly.

French project NYL was the creative vehicle for guitarist Michel Peteau and drummer Stéphane Rossini, whose sole album saw the light on a private label in 1976. Small indie label Legend Music reissued this production on CD in 1993, and after many years out of print fledgling label Psych Up Melodies decided that it was time to make this production available again in the fall of 2011.

The original LP contained 9 tracks, of which 8 have been reissued and two of those slightly reworked already on the first reissue of this disc. The missing track, Blue Eyes (Revox Tapes) may possibly be the sound collage appearing at the very end of this reissue version however, as the album has been expanded by a total of 7 tracks. Most of them alternative versions of album tracks admittedly, and as such there isn't too much new music as such to enjoy. But for the avid fans such material is always a treat to encounter anyhow. Still, the original LP's 30 odd minutes playtime has been doubled with all the bonus material, and as these alternative versions and occasional excerpts generally hold good quality they are well worth experiencing also by those who have the original vinyl edition as a treasured keepsake.

The original album appears to be a time-typical partially improvisational effort, perhaps with a foundation in endeavours of this kind more common a few years earlier. Basic themes and motifs serves as a platform for the remaining instruments to play upon, resulting in repetitive circulating psychedelic motifs with occasional freaked out inserts as the most common features. Various guest musicians provide their own special sounds, the bass line of Jannick Top arguably the most distinct of these. Those who enjoy his output will find the sprawling title track to be a delightful experience due to that alone.

Personally I found Nyarlathotep to be the most interesting excursion, a tight and energetic effort with harnessed explosive instrumental features as something of a trademark feature, the dual contrast of light-toned clean and dark-toned distorted guitar motifs on this one a most intriguing aural experience.

If you tend to enjoy 70's psychedelic rock with a distinct improvisational element played on top of tight and planned foundation, and enjoy an album that takes some pride in visiting a number of different moods and arrangements, Nyl's sole production is one you should seek out. Magma completionists might also want to get this one due to Top's guest performance, and he's on good form on the three tracks where he contributes. Not a classic production, but those with a soft spot for this kind of material will most likely be charmed by this CD.