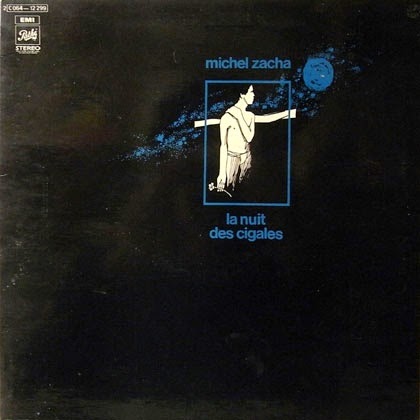 
French artist MICHEL ZACHA was a colourful addition to the roster of French artists that was active in the 1970's, his output incorporating elements from a vast number of different stylistic expressions from both sides of the dividing line between mainstream rock and art rock. His creative highlight was the years 1972 - 1977, when he released the concept album trilogy Promesses d'Atlantides, consisting of La Nuit des Cigales (1972), Le Vol D'Icare (1974) and Inutile (1977). Little else is known about this composer and musician today.

A French singer/songwriter, who's actual surname was Zaccharopoloulos, propably of Greek or Cypriot origin.After a brief career with small groups he signed with the Pathe label, on which he released a trilogy of albums.The first was issued in 1972, its title was ''Vol 1: La nuit des cigales'', featuring among others English bassist Alan Jones, pianist Georges Rabol, percussionist Marc Chantereau and guitarist Jean-Pierre Alarcen.

The presence of such an important supporting group does not necessarilly secure an ambitious and challenging record, as Zacha's debut contains strong influences from the typical French singer/songwriter style, like plenty of vocals, delivered either in warm or more expressive singing lines, constant acoustic passages, possibly played by Zacha himself, and accesible song structures with limited adventurous textures.There are also a lot of dual acoustic/electric moments with an evident psychedelic vibe and a bit of dramatic color in these particular moments.The light use of flutes next to the more ethereal vocals and the discreet, orchestral keyboard parts (like in the opening ''Accident'' or the long ''Promesses D'Atlantides'') recall the atmosphere created by legendary acts such as ANGE or maybe TROCARN.As a whole though the album is dominated by a heavy ballad/songwriter atmosphere, which receives variations from the smooth instrumental performances of the guest musicians.