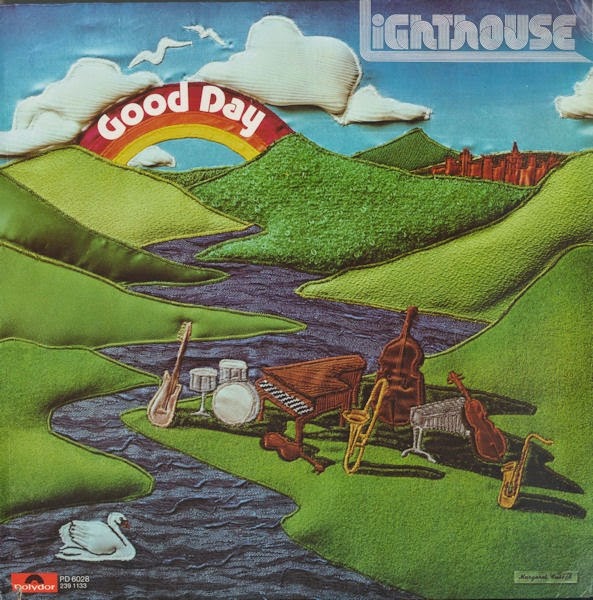 Good Day was from 1974 and the follow-up to Can You Feel It, which was my introduction to the band. Speaking of which, avoid the MP3 album Can You Feel It. It has gliches, such as droputs in at least one of the songs ("Same Train"). I didn't bother to listen further, because if it isn't ALL good, there's no point. Good Day, on the other hand, is excellent. No skips, dropouts, etc. It could use a remaster, like all the MP3 Lighthouse albums, but this one sounds better than most.

Like Can You Feel It, the lead vocals are divided between Skip Prokop and Ralph Cole (ok, Dale Hillary sang "No More Searching" on CYFI, but work with me here). But unlike that album (or any other Lighthouse album) it has considerably less horns and strings. It has just enough to let you know this is still Lighthouse, but some tracks like "Be Here Now", "Good Day", and "Man, Woman, Child" don't have them. Also, for the first time, Skip puts down the drum sticks and plays guitar, along with guitarist Ralph Cole. As a result, this album is more guitar-heavy than other Lighthouse albums. The drummer on Good Day is Billy King, who does an excellent job. But it remains the only Lighthouse album with someone else at the drums.

After Good Day, Lighthouse didn't release another album for 22 years. In 1996, there was the reunion album Song Of The Ages, but it sounds very different from the 1969-74 period. That's the only studio album of theirs I haven't bothered to get. Reunion albums rarely work and that one is no exception. So as far as I'm concerned, Lighthouse stopped after Good Day.

Email ThisBlogThis!Share to TwitterShare to FacebookShare to Pinterest
Labels: Lighthouse