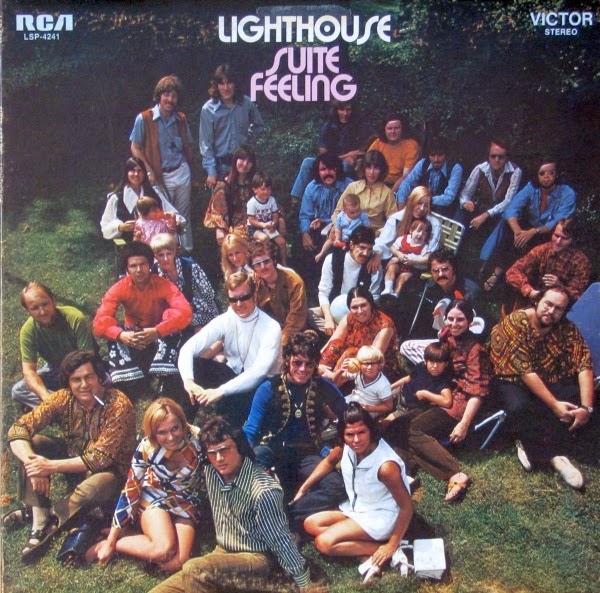 Lighthouse's second album (which seems to have also born the title "Plays for peace" on at least one version) was released in 1969, a year after their debut. The sound is that of a band who are full of potential, but are still trying to find their identity and direction.

With a line up consisting of no less than 14 members including five strings players and a four man brass section, it would be reasonable to expect to be presented with an album of orchestral rock. The opening track "Chest fever" however quickly indicates that this is in fact a rock album with pop overtones. The track has a jazz rock basis, with some fine organ work by Paul Hoffert, one of the long term core members of the band. Along with drummer and band leader Skip Prokop, Hoffert is the band's principal songwriter. "Feel so good" moves further towards pop, with melodic harmonies and an upbeat melody. Pinky Dauvin's lead vocals are complemented by some excellent lead guitar played by Ralph Cole.

It is only when we get to the lengthy, bizarrely named "Places on faces four blue carpet traces" that we come to the essence of the band. This is a much looser jazz based improvisation which sees the brass section taking centre stage. Prokop feels the need to assert his status as band leader with a superfluous drum solo before Hoffert's keyboards reassert the need for a musical structure. The track then develops through a classical/jazz section with all the band members seemingly contributing. While the brass section invites comparisons with BLOOD SWEAT and TEARS and CHICAGO, the string section gives the piece a generally softer feel. Cole's guitar work is once again a highlight of the track. Drum solo notwithstanding, this track is surely one of the highlights of the album.

"Could you be concerned" returns to the lighter side, but the apparent pop sound disguises a highly intricate piece, with lush harmonies and a complex arrangement. The same can be said of the reflective "Presents of presence" where the echoed vocals are very effectively placed back in the mix allowing the delights of instrumental backing to be heard. "Taking a walk" has the feel of being a precursor to "One fine morning", a superb song which would be recorded a year later. The track includes a tasteful instrumental middle section. "Eight loves of bread" and "What sense" are similar anthemic songs along the lines of the Band's "The weight", with a positive lyrics and a high feel good factor. "What sense" has an especially notable arrangement, exploiting the full diversity of the line up.

The album closes with a cover of the Beatles "A day in the life". While the version here is faithful to the original the band successfully stamp their identity upon it. The brass fanfare after "Somebody spoke and I went into a dream" is particularly effective. A coda of "Also sprach zarathusa" is added to the end of the track.

In all, a confident second album which, while arguably struggling to find a clear direction shows the band are willing to experiment with a number of styles and sounds. Recommended.

Email ThisBlogThis!Share to TwitterShare to FacebookShare to Pinterest
Labels: Lighthouse