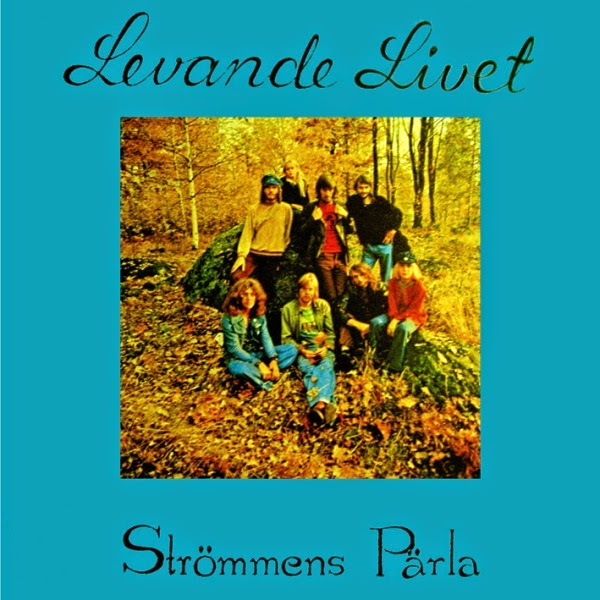 
Sometimes regarded as a continuation of Telefon Paisa (or if you prefer, Sogmusobil). Truth is that only two of the members had previously been in Telefon Paisa: Johnny Mowinckel, and the ever so illustrious character Einar Heckscher. There are also only a few musical similarities between the two bands, with Levande Livet being far more skilled than Telefon Paisa and their pathologically untogether, albeit strangely attractive, freak jams.

”Strömmens pärla” is all over the place, stylistically. They move from the scruffy blues of ”Bellman” and album opener ”Mänskolivet”, through some sort of jazz in ”Samma samba”, to a kind of singer/songwriter rock not entirely unlike John Holm in ”Out of This Mess” and the slightly psychy ”Fri idrott”. The high points of the album however are the two final tracks, ”Hr. Drever & hr. Ströver” and ”Strömmens pärla”. The first one is the album's shortest track, but long enough to get into a stoned groove. (No wonder, since the band was excessively into a variety of stimulants...) The title track on the other hand is the longest piece, a loud, gritty workout with a prominent horn section including jazz trumpeter Maffy Falay – later of Sevda fame – blows it out, and some loudmouthed wah wah guitar.

It's a pity that the vocals are too low in the mix. Well, some might appreciate that they're are barely audible at times, as Einar Heckscher admittedly isn't the greatest singer in the world. He has a gruff, gravelly voice that sometimes hit the notes and sometimes not. I for one actually like his ”who gives a shit anyway” style of singing, but I know that some people find it brutally off-putting.

”Strömmens pärla” is by no means a masterpiece, but I'm quite fond of their dirty sound. Fans of Gudibrallan and Love Explosion will likely groove hard to it if you can find a copy. It's among the rarest LP's on the Silence label.

Those who want more Levande Livet in their lives ought to check out the recently released 40 CD (!!!) box set ”Progglådan” which features a live recording, also from 1973 and made for Swedish Radio broadcasting corporation. Slightly heavier and noisier, that recording is a fine complement to their lone studio album.

Almost all of the members went on to other glories after Levande Livet disbanded. Gunnar Bergsten later brought his saxophone to Bo Hansson, Mikael Ramel and Xtra sessions. He had previously been in avant jazzers G.L. Unit, as well as in Fläsket Brinner and, along with Maffy Falay, in the aforementioned Sevda. Hans Berggren turned up many years later in an obscure band called Happy Boys Band who managed to release one single only in 1980. Bass player Lars Bergström and guitar slinger Tommy Broman eventually teamed up with the infamous Tom Zacharias on the latter's equally infamous ”Belinda” albums. Broman also recorded one solo album for the YTF label in 1976. Peter Smoliansky is the son of renowned jazz singer Nannie Porres, and founded garage rhythm & blues band Rost in the late 70's before joining highly successful rock act Eldkvarn for several years in the 80's and early 90's. He plays darbouka on ”Strömmens pärla”, as he prior to that also did with Anita Livstrand. Einar Heckscher became a noted translator of predominantly American underground literature, and he's also the brother of Social Democrat Sten Heckscher who during several years was head Police Commissioner in Sweden.