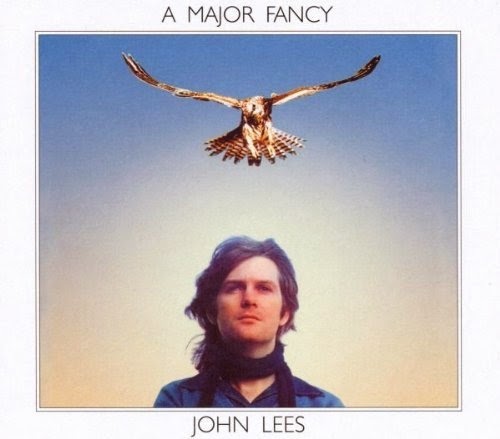 
John Lees is best known as the guitarist, vocalist, and song writer with Barclay James Harvest. While one of the two current line ups of that band now bears his name, he has only ever released one solo album, "A major fancy".

The album was recorded in 1972, when the band were in the process of moving from Harvest records, who had released their first four albums, to Polydor records. The move to Polydor was a positive one, which gave the band a new lease of life.

During their time on Harvest, Lees had accumulated a number of songs which for one reason or another were not considered right for BJH. He therefore recorded "A major fancy" without the other BJH members being involved in any way. The band's new record label were uncomfortable with the idea of Lees releasing a solo album when BJH's first album for them ("Everyone is everybody else") was about to hit the streets. "A major fancy" was therefore shelved, finally being released in 1977 on the Harvest Heritage label, usually used for re-issues of older albums at a budget price.

The album includes contributions from 10CC's Kevin Godley and Eric Stewart, along with Rod Argent of the Zombies and Argent. It was produced by Wally Waller of the Pretty Things, who also contributes bass, mellotron, moog and harmony vocals.

This is however very much Lee's project. The sound is noticeably different to that of BJH although some of the songs could easily have been recorded by that band, indeed "Child of the universe" was used on "Everyone is everybody else". While the melody of that song is instantly recognisable here, and the vocals are still the distinctive voice of Lees, this version is quite different. The song is sympathetically orchestrated with an extended choral ending rendering it far less acidic than the BJH version.

Three of the pieces are "Untitled", perhaps implying they are demos or works in progress. In fact they are most definitely finished products. "Untitled number 1- heritage" (is that not a title?) opens the album with some fine piano by Gordon Edwards leading to the distinctive tones of Lees' guitar. The vocal sections are functional but the track features a wonderful organ solo by Rod Argent. "Untitled no 3", which closes the album, is a pleasant light piece slightly reminiscent of BJH's "One night". The instrumental credits indicate that it is the sole track to feature melotron, but its presence is difficult, if not impossible, to detect.

"Sweet faced Jane" is a country/folk tinged song, with strong hints of "Poor boy blues" which featured on "Everyone is everybody else". "Whitburg night", with its soft, slightly distorted vocals and typical Lees guitar would have sounded at home on BJH's early albums, perhaps in place of the similar "Harry's song".

There are weaker moments on the album. "Untitled no 2" is a light, throwaway number with semi-whispered vocals and a funky beat. "Long ships" is a rather ordinary mid- paced number, with an unexciting melody but interesting lyrics. The track segues into a brief, but far more exciting guitar run entitled "Link piece".

In all, an album which will be of substantial interest to BJH fans. While by no means a long lost BJH album, Lees distinctive vocals and guitars make for a fine, if occasionally uneven, album.

The CD version includes three extra tracks. Two of these are cover versions of songs by the Eagles and Eric Clapton which were released as a now collectable single.