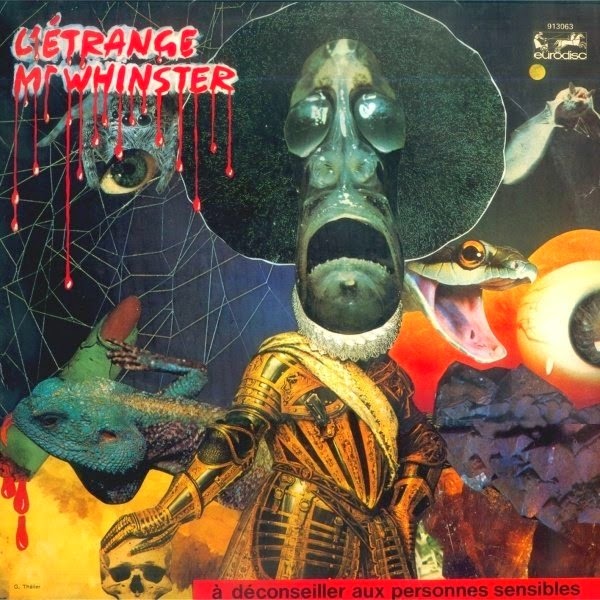 This is the second album I ever bought with a man wearing a fish head!

Though not as avant blues orientated as Captain Beefheart's Trout Mask Replica, this thing sure does get convoluted and haphazard from time to time. The instant human reaction in pretty much all we do, is trying to locate patterns - things that make us go: Ahhh, now I get it! The thing is, that with a lot of the avant-guarde releases, and here I am not simply talking about a Frank Zappa album or the odd Samla Mammas Mamma, -but the ones that sound like a demented orchestra playing tick tack toe on pots and pans inside your local diner, - you are some times left with mayhem running in all directions without much of a red thread to follow. Sure, after a while you come to grips with the situation and the feel of the album - suddenly remembering what goes where and when, but a lot of this stuff stays uncomfortable and angular, twisted and distorted - at least when you start comparing it to 'regular' music that is....

This is NOT 'regular' music! Starting off in the midst of a horror flick with an out of breath person - running away from something, with squeaking noises, fumbling beats and a weird pseudo musical segment ebbing and flowing - conjuring up an atmosphere of unease and a sense of anything can happen, and it most probably will.

The threatening ambiances of the organs here actually sound like remnants off of an old Bela Lugosi movie, and when you then hear those creepy unbalanced tribal drums filling up the backdraft as well as a dark burping narrative voice that seems to stem from a watery grave - the whole feel of insanity and horror all starts multiplying by the second. (If I am relegating this album as something for the weirdo initiated and few - that's probably a pretty good perception.) Then you have the immanence of the fan- faring trumpets, the old school string arrangements and a couple of hundred freak show sound effects, that perfectly mirror this parallel universe. Cat screeches, rotting doors opening, scrambling moogs from outer space, crying, shouting, horses neighing, African chanting(Oh yes I am not even kidding you!) owl howling, winds and then some. It is done rather brilliantly, and you feel like you've stepped into an old cinema, where the screen has gone missing.

I don't find any of this particularly frightening - as a matter of fact, most of the music found within this little Frankenstein soundtrack, leaves me chuckling like a little girl scout. There are however some musical passages hiding in there that rise above the quirky madness, and transport the listener to a strange twisted Pink Floydish land, where cymbals a-crashing and the silky smooth guitar talks familiar in your ear. These are quite beautiful - as well as the few scattered female choir ornamentations that counter the grim and loosely assembled musical puzzle pieces. Additionally, I do particularly enjoy the percussive electronics that commence the second cut here. Sounds like a flickering woodpecker with a rudimentary sense of melody.

I guess most of the album is based upon the Maldoror legend, but then again I am not French. I do however understand most of the lingo here, and what I am able to pick up seems to fit within the Maldoror sphere like a fly on a turd. The last cut features a narrative voice reading a passage of Lautreamont, in which Maldoror describes from the inside what he feels as his decomposing body is being eaten by worms, crabs, dogs and other animals. The choice of words seems pretty repugnant, but I personally love the assumed vileness of it all.

Recommended to avant heads with a soft spot for old horror movies and theatrics.