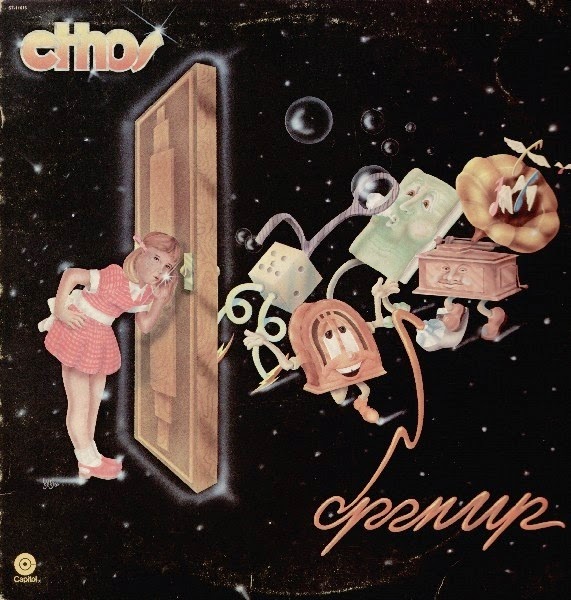 Ethos play in a style with touches from a range of prog groups of the era - there's some very Chris Squire bass from Brad Stephenson and Robert Fripp guitar from Will Sharpe, for instance - with an overall sound reminiscent of a looser and more ragged around the edges take on classic Yes, with an injection of mercurial unpredictability which serves their ends well. And what Yesalike would be complete without a little hippy-dippy New Agery - in this case, coming in the form of the Utopian vision of Sedona. In short, a very interesting little package which would surely have received more attention had it come out four years or so earlier.

Indiana's contribution to popular music, I would venture to guess that if you took a nationwide street poll asking for the name of three prominent musicians from the Hoosier State the reply would be Michael Jackson (Gary), John Cougar Mellencamp (Seymour) ... followed by a long reflective pause and a shrug of the shoulders.

Oh sure, you might dredge up a nostalgic 80 year old senior citizen who fondly remembers the Golden Age of Radio and songwriter Cole Porter (Peru) or singer Hoagy Carmichael (Bloomington); but it will take a proud Mid-western Hoosier to rattle off the names Axel Rose and Izzy Stradlin of Guns N' Roses (Lafayette), David Lee Roth (Bloomington), Mick Mars of Motley Crue (Terra Haute), and jazz guitarist Wes Montgomery (Indianapolis) without hesitation.

And if during your travels you stumble upon the rarest of species in the animal kingdom - a Hoosier with a passion for progressive rock - then you can expect to hear the names Umphrey's McGee (South Bend), and two classic American prog/rock groups from the 70s' - Yezda Urfa (Portage) and Ethos (Fort Wayne).

Ethos were but one of the many fantastic pioneering American progressive rock groups that languished in anonymity in the mid to late 70s' along with: Babylon, Cathedral, Atlantis Philharmonic, Quill, Fireballet, Easter Island, Hands, Pentwater, Mirthrandir, Lift, Happy The Man, and the fore mentioned Yezda Urfa.

Kansas and Styx are the only surviving US genre groups to attain an international fan base beyond the intimate confines of the progressive community; both blessed with the staying power to amass an impressive decades long discography of studio albums: Styx (15 albums) Kansas (14).

For their 1976 debut album "Ardour", released on the prestigious Capitol Records, Ethos proved themselves the equal of their British progressive counterparts. The band combined the tried and true blueprints for success pioneered by Yes, King Crimson, Gentle Giant and Genesis with their own unique Anglo-American slant. When Ethos released "Adour" the band was a five piece ensemble boasting two flashy keyboardists in Duncan Hammond (organ, synthesizer, piano, ellophonium, voices, Mellotron) and Michael Ponczek (organ, synthesizer, Chamberlain).

Ethos possessed the uncanny ability to mesh the pastoral textures, sonic dynamics, and the sophisticated syncopation and complex time signatures of early Yes, King Crimson, and Gentle Giant without succumbing to the outright mimicry of a band like Starcastle, who were tagged with the unflattering 'YES-light' label early in their career. Ethos were undeniably a symphonic progressive rock band, yet established their own distinctive harder edged style thanks in no small part to lead vocalist and primary songwriter Will Sharpe, who did not try to parrot the vocal styling of either Jon Anderson, Greg Lake, or Peter Gabriel to favor grace with fans of British progressive rock.

The interplay between Sharpe's guitar and Michael Ponczak's moody Chamberlain (an electro-mechanical keyboard instrument similar to the Mellotron) converged as a haunting reminder of the early Crimson classics "In The Court Of The Crimson King" and "In The Wake Of Poseidon". So comparisons to early Crimson are not without merit.

In fact when asked why Ethos ultimately broke up Will Sharpe writes in the linear notes of the CD "Relics": "We desperately wanted to become the American response to King Crimson, but America didn't want a response."

Echoes of Crimson's "21st Century Schizoid Man" and "Pictures Of A City" are ever present throughout the the first track "Pimp City".

"Memories" employes the moody ethereal Chamberlain washes, in much the same way as Ian McDonald manipulates his Mellotron on the Crimson ballad "I Talk To The Wind", then the tune abruptly soars into the cosmos with a sequence of otherworldly beeps and blips from Ponzek's Mini and Polly-Moog.

"Start Anew" brings back memories of the first time I experienced "The YES Album" with Chris Squire's ferocious Rickenbacker 4001 bass licks and Steve Howes blistering guitar work. Will Sharpe and Brad Stephenson share that same symbiotic relationship as Squire and Howe. The tune picks up even more kinetic energy as it progresses channeling elements of Frank Zappa and Happy The Man during the instrumental interlude.

"U.V. Melody" is a 32 second snippet performed with Chamberlain flutes, evoking images of the Renaissance Age and a band of traveling troubadours. Comparable to Gryphon, Focus, and Gentle Giant.

"Marathon II" borrows heavily from their earlier tune "Everyman" from the "Adour" album, dominated by Michael Ponzek's regal Chamberlain and Will Sharpe vocals. "Sedona" is a hypnotic dreamlike ballad you might expect to hear on Pete Sinfield's soothing debut album "Still". We are whisked away courtesy of Sharpe's classical nylon guitar and Ponzek's soaring synths and orchestral Chamberlain arrangement. Quite easy to imagine yourself sitting on a deserted beach, bare toes in the sand, sipping coconut milk while a brisk tropic breeze blows gently on your face, without a care in the world.

The album saves the best for last - "Close Your Eyes", a killer powerhouse track drenched with eerie Fripp-style guitar distortion, creative tempo shifts, awash with symphonic Chamberlain sweeps, and some of the flashiest portamento Moog solos this side of Kit Watkins or Patrick Moraz.

This is amazing music that deserves to be experienced by all fans of the genre. Unfortunately the album remains securely locked in the vaults of Capitol Records, and quite doubtful that it will ever be re-issued. Although it was released on CD for a short time in Japan so you might be fortunate enough to secure a copy on Ebay, Amazon, or specialty shops like Greg Walker's Syn-Phonic Music (Japanese Tachika Mini LP Sleeve).

Based on the sheer number of groups dabbling in prog/rock during the mid to late 70s' it was indeed a most productive time for the genre. But by the time the American artists dipped their toe in the progressive waters the popularity was on the wane. Even YES and Genesis were streamlining their approach to become more commercially accessible as the 80s' approached.

The groundswell support for the disco revolution - spurred on by the blockbuster film "Saturday Night Fever" - as well as the burgeoning underground punk scene sounded the death knell for the upstart American progressive groups at the close of the decade. And as a result brilliant bands like Ethos are reduced to little more than a footnote in the history of the genre - or worse yet - completely forgotten.

Don't allow the memory or music of Ethos to dissolve into oblivion. Seek out the three Ethos albums: "Adour", "Open Up" or "Relics" and add them to your collection. You won't be disappointed.

Email ThisBlogThis!Share to TwitterShare to FacebookShare to Pinterest
Labels: Ethos