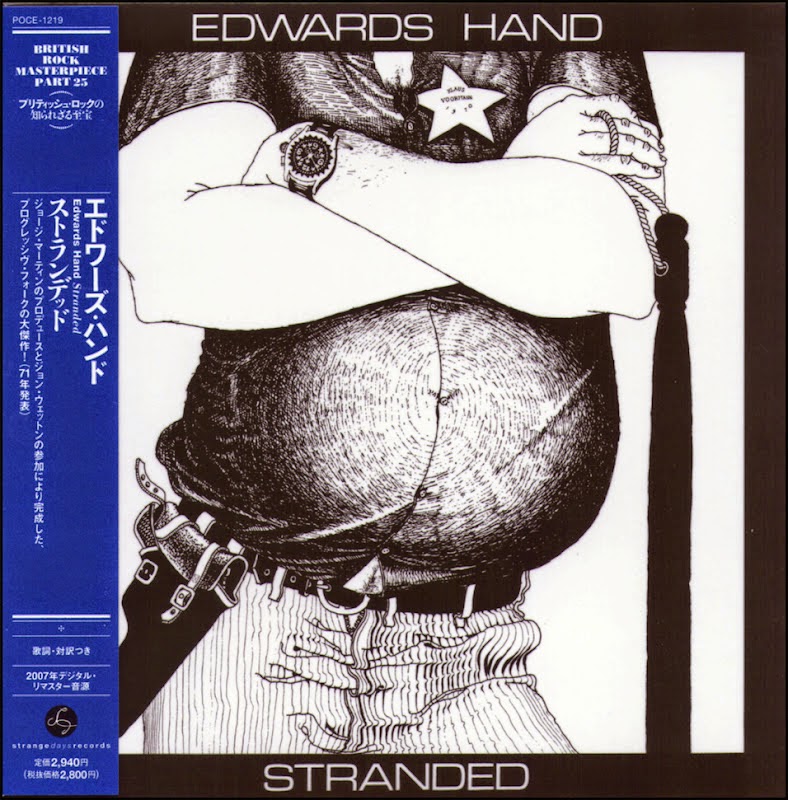 
Having worked with George Martin on their self titled debut, Edward's Hand began recording at Morgan Studios in 1970, attempting to create a harder and more progressive sound than before. There where no nervous second album vibes here! The album is comprised of evocative and intelligent progressive pop songs immaculately produced featuring Edward's and Hand's distinctive harmonies to the fore.

The second half of the album is effectively a concept of alienation and isolation, covered in the seven minute title track and the twelve minute epic Death Of A Man. which includes an incredible "orchestra duelling-with-moogs" mid section followed by a beautifully majestic and Beatles like coda. Stranded marks its reissue here on CD with the inclusion of the original artwork by Revolver cover artist and long term Beatle friend Klaus Voorman.

The line drawing of a Southern Sheriff, ties in with the lyrics of Sheriff Myras Lincoln - a song about an American racist policeman - and was subsequently banned and replaced with different artwork by RCA in the US. Clearly more confident and adventurous lyrically on this album, Edward's Hand also had more time with George Martin during the pre-production stages. This preparation time, an intelligent lyric writing team and Georges complex yet concise orchestral arrangements give their second LP a much worldlier and unique feel.

Edwards Hand were the first group that George Martin arranged and produced after The Beatles. This is the band's second album and was originally released in 1970. It features some stunning string arrangements by George Martin from the first sessions to be mixed at his then new Air Studios.

The cover art is a controversial caricature of a US Sheriff by "Revolver" Beatles artist / friend Klaus Voorman. This artwork was banned by the US label and was subsequently replaced with different artwork on the original US pressing of the album. It is re-instated on this release. Edwards Hand were formally the short-lived Picadilly Line who released the ultra rare album The Huge World of Emily Small, whilst Rod Edwards was also a key member of legendary UK folk band Jade.

Stranded features John Wetton's first guest appearance on an album, just before he joined Family and Jimmy Litherland of Colosseum. The band is virtually the same grouping that backed Marianne Segal and Dave Waite on the legendary Fly On Strange Wings album by Jade.

This preparation time, an intelligent lyric writing team and George's complex yet concise orchestral arrangements give their second LP a much worldlier and unique feel.