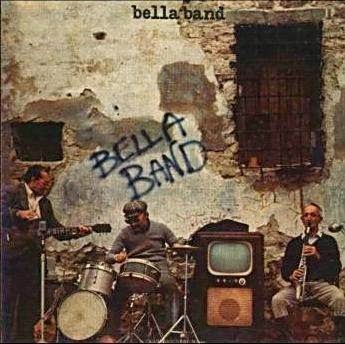 While the Italian symphonic scene of the '70s gets most of the attention it is becoming clearer to me how fertile the fusion/jazz-rock was as well. I'm beginning to discover the likes of Bella Band, Esagono, Etna, Kaleidon, Duello Madre, Rocky's Filj, etc, in addition to the obvious bands like Arti Mestieri. The short-lived Bella Band were from Florence and released but one album on the Cramps label in 1978 before they disappeared. Their drummer Mauro Sarti used to be in the popular RPI gem Campo di Marte and most of the members would continue on with music after the break-up of Bella Band. It's a shame they split so quickly because this album is very good and it is reported that they had plenty of live activity as well.

Musically, Bella Band really snuck up on me in a hurry. Generally speaking I'm not the biggest fan of dryer fusion-I like a bit of colorful influx from other genres to spice it up a bit. Bella Band at first seemed pretty dry and doesn't deviate all that much from the task at hand (no big operatic vocals or backwards cello loops busting through the door) but within short order the pure joy of the obvious musical mastery was grabbing me. Bella Band features only 4 extended pieces over this short album but they cover a wide range of colors, with monster musicianship all around. With my thus-far fairly limited jazz knowledge I might say they are close to Duello Madre in pacing and energy, but with a bit of the added color of Esagono in the flute and clarinet, and occasionally some of the funkiness of Nucleus in the sax and bass playing. The use of horns is excellent and well integrated, alternatively classy or funky depending on the section. Guitarist Luigi Fiorentini is a jaw-dropping player and deserves to be on the list of great fusion guitarists. Yes he possesses the ability for rapid-fire notes but also there is a wonderful sense of control and melody that is never lost in a speed-fest. "Promenade" has sections that slow and blend a bit of a Carpe Diem style "refined spaciness" into the jazz, never getting too weird but allowing the listener to breath a bit from the constant intensity that can make some fusion albums a blur. It is almost a place for reflection that reloads the listener for the next frenzy. Very nice touch. Other than that excursion they remain mostly in the realm of clear jazz-rock, their badge being simply how beautifully they execute. It's just such an enjoyable listen from start to finish and that is not something to take lightly.

Bella Band is the definition of "lost, underappreciated gem" of the 1970s. How this band has not received more love by prog-fusion fans is beyond my comprehension. It is imaginative, musical as the day is long, and beautifully paced and constructed. While perhaps not groundbreaking the Bella Band will be worth the time of any jazz-rock fan-a sure thing if there ever was.