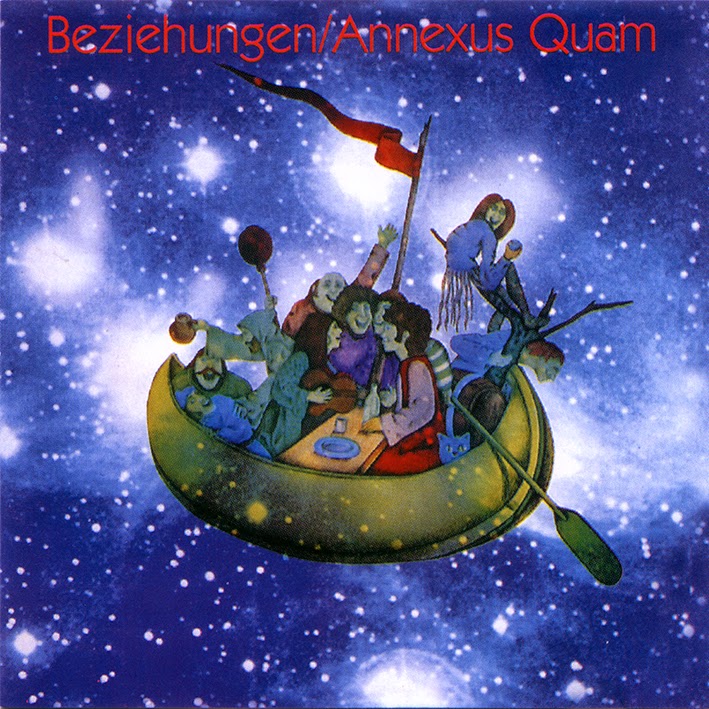 Annexus Quam underwent a radical change of experimental rock style between the splendid debut album "Osmose" and their sophomore effort "Beziehungen". For this album, the band got rid of a permanent percussive section and focused more decidedly on the free-spirited elaboration of horns and flutes and the enhancement of the avant-garde potential (already present in "Osmose" but handled within a more explicit frame). In this line of work, the band had it clear that they better highlight their talent to create and develop atmospheres as a conjunction of individuals instead of going for a compact collective sound. The album kicks off with 'Trobluhs el E Isch', a track softly relying on partially defined textures that feature vivid dialogues between sax and trombone, with the dual guitar strumming and controlled bass lines preparing a pertinent harmonic foundation, pretty much in the cosmic vein. In fact, this track is related to the quieter aspects of the band's debut album (and I'm not the first one to notice this). The grayish atmosphere delivered in this opener is succeeded by the inscrutable 'Leyenburg 1', a mysterious yet delicious exercise on free jazz-meets-contemporary chamber. Once again, the sax and the trombone indulge in dialogues that set relevant moods for the track's development, but this time the structure is less solid: it is something that goes on deconstructing and reshaping as the interactions go on. Ambiences vary from deceitfully relaxing to exhilarating and back again. The guitar phrases and percussive tricks stand somewhere between the chaotic side of late 70s psychedelia and the musique concrete-friendly trends that were at the time followed by Faust and Cluster. Meanwhile, the contrabass stands on the jazzier side of things, delivering discrete cadences in calculated places. The 16+ minute long 'Dreh Dich Nicht Um' is set on a languid, hypnotic structure of rhythm guitars (one of them Spanish) and bass subtle ornaments that states a tricky hint to jazz atmospheres: the jazz factor is first capitalized by the flute, and then by the sax. Volquartz shines here like he had never done it before on any AQ piece: when his sax is left alone, he knows how to feature even in those instants in which the void is utilized. At one point, chimes and hand percussions emerge to prepare the road for the reappearance of the Spanish guitar, which now plays a series of stylish arpeggios in a contemporary chamber mode. The flute lines are created with a sense of encapsulated energy, while the soft pulsations displayed on the two guitars bring an exotic mood similar to Amon Düül II's ethnic moments or Agitation Free (without the drums, of course). 'Leyenburg 2' retakes the avant-garde determination of 'Leyenburg 2', until we get to the 2'20" mark, which is when the marriage of trombone and bowed contrabass set the foundation for the controlled coda, whose fade-out comes too soon. This is a weird album, indeed, yet its musical excellence in terms of prog krautrock-style is perfectly patent (at least, to my ears). Many AQ connoisseurs reasonably prefer the debut album, but "Beziehungen" is the album that should reveal us the floating side of their music.