The Blackbirds
1971
Touch Of Music 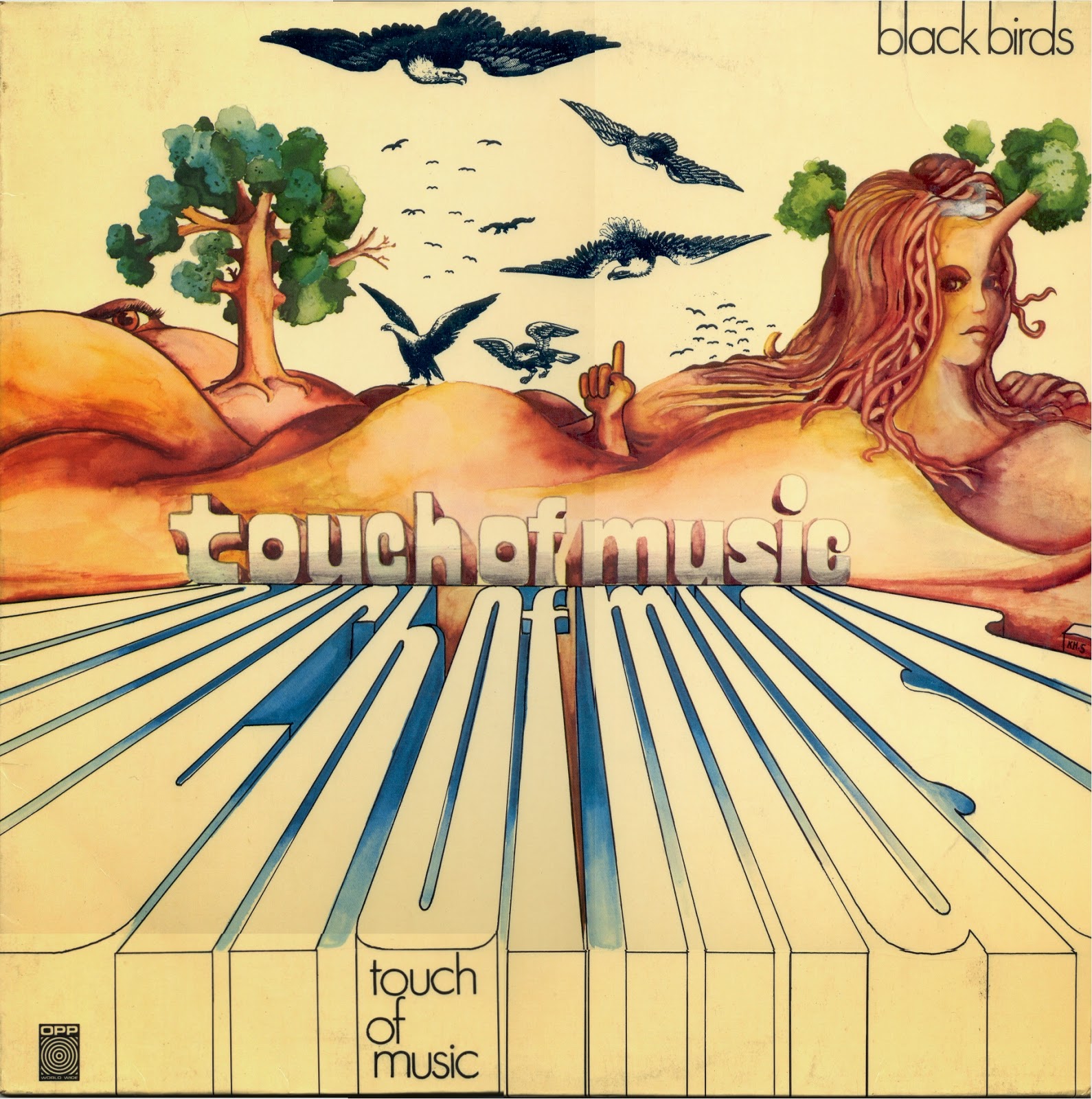 By 1969 the only holdover from the original band was multi-instrumentalist Werner Breinig.  The rest of the revamped band featured keyboardist Peter Bely, bassist Heinz Koop, and drummer Eckhard Gross.  The revitalized group's first move was to release an obscure German 45 for the Opp label:

1970 found them signed to the BASF-affiliated Cornet label, but under pressure to adopt a more 'progressive' imagine, they changed their name to 'Blackbirds 2000' releasing the single:

The single did little commercially (good luck finding a copy) and Cornet promptly dropped them from it's recording roster.

The band promptly morphed back to their original Blackbirds name and underwent another personnel shift with Wolfgang Bode replacing Koop on bass and Charles Sikora taking over for drummer Gross.

Signed by the Opp label, the revamped lineup went into Cologne's Rhenus Studio where they were teamed with Konrad Plank.  The result was 1971's "Touch of Music".   So, for what it's worth, it only took me about five years to track down an original copy of the band's sophomore album.  Was it worth the time and effort?  Anyone expecting to hear a collection of beat/pop/rock numbers similar to the debut album was going to be in for a rude awakening.  With Breining responsible for penning all six tracks, this time out the band jumped headlong into the early-1970s progressive pool.

- Having already appeared as the 'B' side on an earlier 45, the album opened up with the classically inspired instrumental 'Präludium'.  With the spotlight on keyboardist Bely, this one sounded a bit like ELP, Focus, or Procol Harum after they'd spend a day drinking wine at a picnic in a local park.  Upbeat and quite perky, but nothing particularly awe inspiring ...   rating: ** stars
- 'All You Need' followed the same classical instrumental path as the opener; albeit this time around the spotlight was split between Breining's violin and Bely's organ.  About a minute into the song the vocals kicked in sending the song in a different direction.  Very pastoral and calming ...  I'm surprised at how much I enjoy this eight and half minute opus.   rating: **** stars
- 'Return From The Water' was the album's most commercial offering.  A tumbling rocker, that's always reminded me a bit of some of Golden Earrings better work, clocking in at over seven minutes it gave everyone in the band a chance to stretch out, but still managed to avoid the usual boredom that accompanied such jams.  Breinig stole the show with a dazzling lead guitar solo.   rating: **** stars
- A pretty, floating ballad that again spotlighted Bely's organ, 'Give Me Freedom' sported some surprisingly sophisticated lyrics and showcased a previously unheard knack for attractive group harmonies.  The mid-song shift to an up-tempo rock setting that served to showcase Breining's lead guitar was somewhat unexpected, but not bad.   Very Procol Harum/RobinTrower-ish.    rating: **** stars
- 'What Is Free' found the band dabbing their collective toes in jazz-rock fusion.  The track sounded like they'd been listening to lots of Camel, Coliseum, Curved Air, Soft Machine and other English progressive bands.  It didn't do a great deal for me. rating: ** stars
- 'Come Back' found the band trying to blend classical, folk, progressive, and rock influences into one big musical stew.  Given such lofty goals you wouldn't have expected much to come out of it and while the results weren't perfect, stretched over ten minutes the track did a surprisingly impressive job of retaining one's interest.  The basic melody was enchanting with  Bode providing some creative bass lines throughout.  Yeah, the extended flute solo and Gregorian harmony sections didn't inspire me to get up and rock the house, but like a couple of the other performances, the pastoral sounds were quite calming.   rating: *** stars

So back to the question of was it worth the extended search?  Nah.  On the other hand, the album was actually better than I anticipated and I can see occasionally playing this one of quiet Sunday mornings.  Not sure how the rest of the family will react, but I'll see.

Email ThisBlogThis!Share to TwitterShare to FacebookShare to Pinterest
Labels: Germany, The Blackbirds