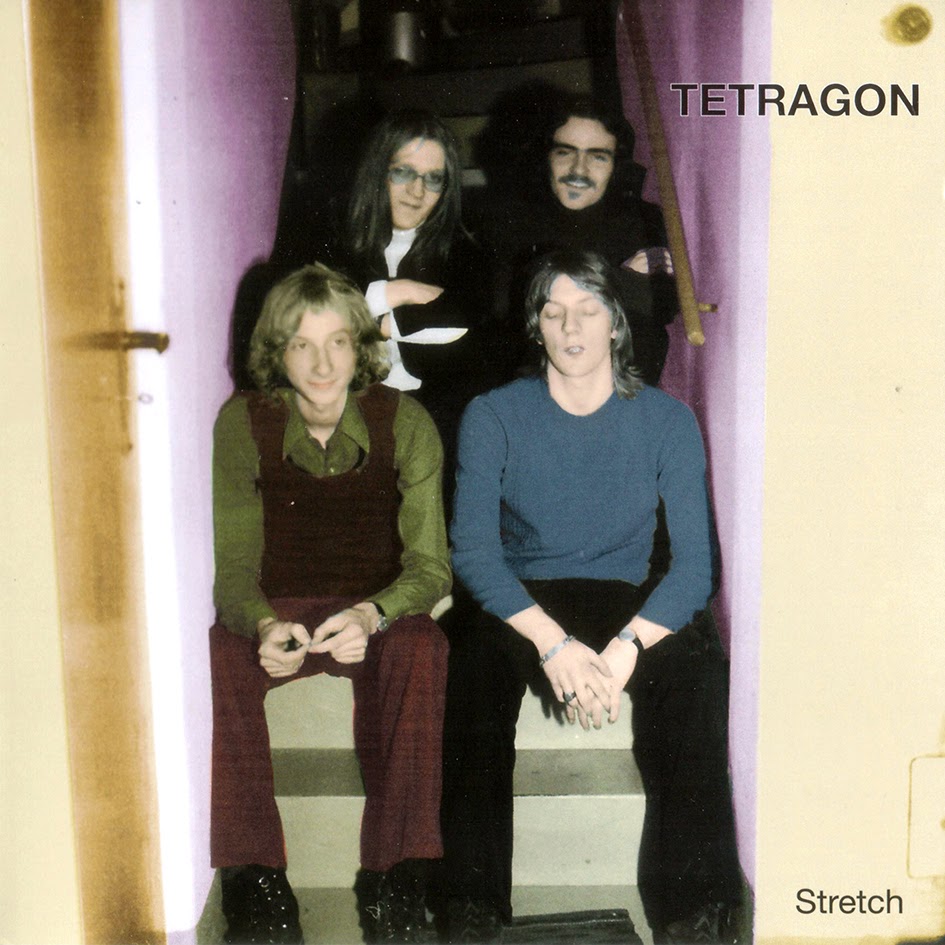 Recorded in 7 days at Windrose Studio in Hamburg in Dec 1971 but never released by the band's erstwhile record label Soma until issued in 2009 by the Garden of Delights imprint.


German band Tetragon recorded only 2 albums before they call it a day in 1972. Unfortunately only one of them ("Nature") was released back then, while for another one we had to wait almost 40 years (who kept it so long on the shelf? Damn him!). Was it worth to wait for it? You bet it was! "Stretch" is a truly great piece of art which is maybe a little less focused than their debut LP (after all material for "Stretch" is some kind of demo recording in fact, not proper "final product") but still manages to remain a real gem. I'm especially impressed that quality of this staff is so good, sounds very fresh and there are no scratchin' crackin' or skippin' problems.

Tetragon's music is often described as jazz-rock but I ensure you that their style is a mix of jazz-rock, symphonic prog & heavy prog in more or less equal proportions. While "Nature" had few vocal sections, "Stretch" is a pure instrumental recording. So prepare for 40 minutes of non-stop organ/guitar battles experience!

1. "Snowstorm" - first track is definitely the most symphonic one here. In fact I'm almost sure that this ultra-catchy main melody was taken from some classical music piece, but unfortunately I can't recall which one. Anyway this almost 8 minutes performance is a truly breath-taking masterpiece! Fantastic, speedy Hammond organ solos fight their way with equally impressive guitar ones. And drums with bass create a fine battlefield for them. The most important is that they never lose the main musical theme so they don't proceed to any lousy noodlings typical for many jazz-rock and blues-rock artists. Hendrik Schaper sounds like impersonation of Marian Varga (from Collegium Musicum) or Alan Park (Beggar's Opera) here, and it's a real compliment of course.

2. "Listen Here" - according to Internet sources this composition was originally written by Eddie Harris but I'm only familiar with Brian Auger's version. Anyway I have to admit that Tetragon's style suits very well these kind of tracks, they really know how to play such jammy instrumentals and not "lose its own way". Schaper & Jaehner play extended duels where guitar & over-driven Hammond blend perfectly while rhythmic duo of Rettberg & Luhrmann take care of keeping the main motif alive, so soloists have a good "background" for their show-offs (anyway we also have quite lengthy bass guitar solo here so everybody has his own "5 minutes"). Equally impressive as Auger's version IMHO.

3. "The Light" - more laid-back track, slightly bluesy I would say, almost relaxing in comparison with previous "demonic" instrumentals. But don't worry, you won't fall a sleep here neither, Schaper's dazzling organ solos won't let you do it ;-). Anyway similarities to Brian Auger's Oblivion Express are clear in this track.

4. "Hovering Stones" - this one kicks off with highly energetic intro filled with frenetic organ chops which sound like taken from ELP's "Tarkus" suite. After that tempo significantly slows down and Jaehner's guitar takes the leading role. However in the second part of the track Schaper wakes up to entertain us with another fistful of amazing Emersonian organ solos. Very solid performance.

5. "Dragon Song" - as I read "Dragon Song" was originally played by John McLaughlin but so far I've been able to listen to only Brian Auger's version. It's a stomping, heavy jazz-rock track with slightly directionless guitar & organ solos. But the worst thing is this repetitive bass line. It's one endless "duu-duu-du-du-du", bleh! It's even more annoying than on Auger's version. Overall bearable but can become tiresome.

Conclusion: "Stretch" is a highly satisfying album filled with stretched (sic!) organ and guitar jams which usually don't lose their direction. If you like Tetragon's "Nature", this album is must-have for you too. I also recommend it to fans of Brian Auger's Oblivion Express, Brian Auger & The Trinity, Collegium Muscium, Colosseum, Beggar's Opera, Affinity, Virus or even The Nice and Atomic Rooster. And don't forget to check first Hendrik Schaper's band - power trio called Trikolon. I love it even much more than Tetragon in fact.
Posted by Unknown at 4:01:00 PM