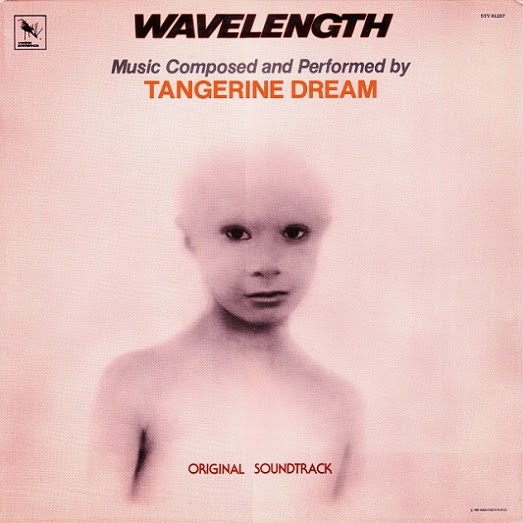 Tangerine Dream's `Wavelength' is the soundtrack to an obscure Robert Carradine sci-fi film from 1983 (not currently available on DVD or Bluray, but it can be viewed on Youtube), and while it offered nothing truly fresh or groundbreaking from the band, it's still makes for a fine background listen while offering several variations of spacey/electronic ambience. Composed by the trio of Edgar Froese, Christopher Franke and Johannes Schmoelling, considering the albums around it such as `Hyperborea', `White Eagle' etc, `Wavelength' still features the ghostly Melloton, as well as having a distinct mid-70's TD period sound instead of the cold plastic 80's that was emerging during that time. It's mostly comprised of short little interludes and snippets which unfortunately means that many of the tracks rarely get time to develop better, and some sections are reworked pieces from previous albums, but generally if you let the album play in it's entirety, it makes for an undemanding listen of eerie electronic music, and it's certainly far from being one of the worst releases in the band's long discography.
The opening `Main Theme' is a spooky plodding electronic pulse where you'd be forgiven for thinking you'd put an album by Italian horror soundtrack supremos Goblin on the turntable instead! `Desert Drive' is a lovely electric piano balled over positive synths that could have easily been included on the `Tangram' LP. `Mojave End Title' is a racing up-tempo synth-pop burst and is probably the most fully realised piece here. There's little traces of the old Mellotron magic on the droning ambient `Healing', skittering almost dance-like beats on the frantic interlude `Breakout', and the staccato acoustic guitar strums over phasing gently sorrowful synths on `Alien Goodbyes' has a somewhat mournful Pink Floyd quality to it. Deep space hostile alien menace pervades `Spaceship', a cold robotic beat chatters away in the background over imposing synths.

Tangerine Dream would offer better soundtrack works (`Sorcerer' and `Firestarter' being particularly impressive), but this is still worth looking into. I actually really enjoy it purely for the fact that it is completely devoid of blatant electric guitar soloing, one thing I always disliked on their studio albums (pretty much from `Force Majeure' onwards if I recall), which I feel made their music a little too obvious and a bit lazy. In the end, `Wavelength' is completely inessential, but a pleasing listen all the same, as well as a perfectly reliable addition to Tangerine Dream collections for more forgiving fans.