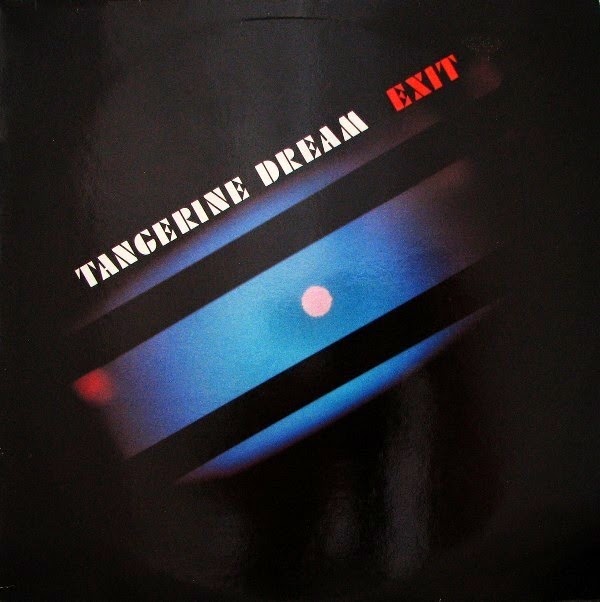 By the 1980s, German electronic music explorers Tangerine Dream had undergone some major changes. Many of the band's long-term fans were less than pleased with the path the group was now taking (see the previous reviews), while others, like myself, had no problem with an evolving TD, as popular music in general was changing with the new decade. (I still enjoy much 80s music -- perhaps not a majority stance here!)
1981's EXIT is a product of that change in direction. Peter Baumann, who had been an integral member of the trio for their vaunted Virgin years, had departed by 1980, to be replaced by Johannes Schmoelling (who had appeared on EXIT's excellent predecessor TANGRAM). In addition, the band's sound had widened to include more rhythmic, accessible and shorter numbers along with their trademark "spacey" material. Both aspects of this 80s TD are demonstrated on EXIT.

Album opener "Kiew Mission" has long been a favourite for me (and now, for my dear wife as well). This track, following a brief and somewhat scary intro which features the simulated sounds of a large gong and screaming fighter planes, morphs into a pleasant piece with a very sexy and breathy female voice chanting the names of the continents in German (there are other lyrics too, but I don't understand enough of the language to translate them). This dreamy number is a good choice for "amorous encounters" -- enough said! After the gentle, extended fadeout, which integrates some evocative synthesized voice into the mix, the band returns to a somewhat more "traditional" sound (for them!) on the understated "Pilots of Purple Twilight," which would readily lend itself to soundtrack use.

The third track, "Choronzon," typifies the newer, more universally approachable Tangerine Dream that is (apparently) anathema to so many freaked-out former fans. I however, really like this up-tempo, even uplifting song, and followers of rhythmic electronic acts like Kraftwerk should also find much to like here. (Many of TD's 80s and early 90s releases have such a track -- a shorter, faster, dare I say -- gasp! -- near "commercial" number, that might even move some to tap their feet -- nay, even to consider dancing! Perish the thought! Stop snickering so superciliously, Hugues!)

The disgruntled old "heads" had best leave the room at this juncture, or simply skip "Network 23" altogether, as this is another one that will have your household robots getting up to ponderously dance about the domicile, metal feet labouriously clunking, and thereby disturbing the Soma-induced repose of your neighbours in the unit below. "Far out! Cut a rug, R-2! No! Not literally, you metalloid moron! Aargh -- my simulated plastic Persian! That cost me 10,000,000 Earth Credits!"

The final song may just soothe the jangled nerves of the addled old hippies in attendance, and possibly even placate peevish progholes. All is not lost for the nostalgically backward-gazing denizens of this alien 80s "Brave New World" (that has such wonders in it!); for this set, "Remote Viewing" has perhaps the closest kinship to the "melting music" of the band's classic mid 70s era. Very spacey! Is that a gigantic electrical storm I descry upon the planetary surface far below?

Thus, EXIT is a fine choice for those more open-minded Tangerine Dream fans who supported the band in their 80s incarnation, but the disc still retains examples of TD's classic sound for those who would have wanted them to stick to formula. I really like EXIT, but (despite the attempts at humour above) I can understand why many long-term fans were less than enthusiastic with the new direction. Was it progress? Was it all a horrible mistake? Decide for yourself, but I still think that this is very good electronic music.