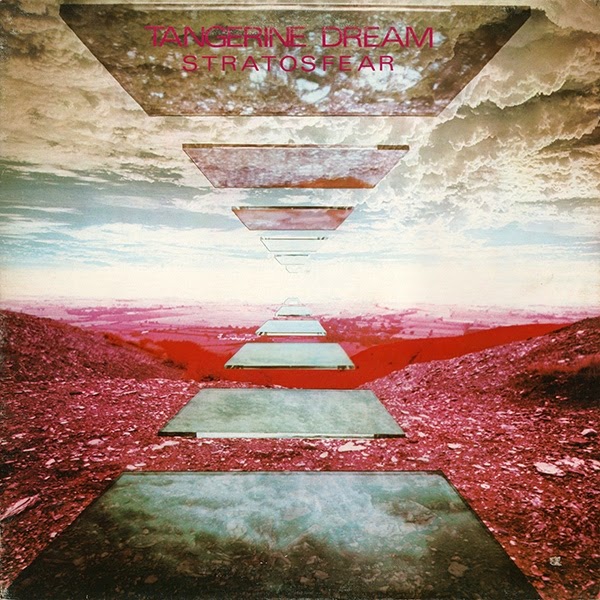 Total Time: 34:39
The last studio album of the line-up Froese, Franke, Baumann recorded entirely in a small studio in Berlin 1976.

Following the path of increasing symphonic-progressiveness that marked the first six years of TD's Virgin career, 'Stratosfear' is the most symphonic-oriented album by TD with Peter Baumann still in the band. The emphasis on the organization of clear melodic lines and compelling keyboard orchestration is quite clear, while still sticking to the electronic ambience formula that TD learnt to make their own. The title track kicks off the album with grandeur and sheer elegance, introducing a couple of 12 string electric guitar arpeggios over a soft, dreamy keyboard layer once the main motif is introduced on Moogs and mellotron, the listener is hooked into the sequence of gentle variations on synth and lead guitar, somehow reminding them of WYWH-Pink Floyd and Moon Madness-Camel. The closing comeback of the opening theme in a more melancholy mood ends the cycle in order to give the listener room for meditation about the show of ethereal beauty they are presented to. 'The Big Sleep in Search of Hades' is also constructed under the main theme/interlude/reprise premise. The opening-closing section is a graceful Baroque-like sonata built upon the dialogue between real harpsichord and mellotron flute; what happens in between is a somber Gothic synth/mellotron string extravaganza, pretty much related to the overall spirit of 'Atem' and 'Phaedra', though not as harsh. Once again, pure beauty becomes the rule at writing and performing - this particular number feels stylistically connected to the stuff created by Schicke Führs & Fröehling and Pulsar. Things get more exotic and cosmic in '3 A.M. at the Border of the Marsh from Okefenokee', whose Arabic-like lines on mellotron brass, synth and electric piano, flowing synth layers, and occasional passages on harmonica manage to convey sonically the situation of having a nice meditative walk by a march before the first light of dawn. IMHO, the best track is 'Invisible Limits', which is actually structured in a similar way than the opening cut, without the reprising motif in the end. In exchange, after the symphonic tour-de-force conveyed by the clever interplay of keyboards and guitar, we are first offered a minimalistic succession of random and almost unnoticeable touches of synth and electric piano, then concluding with an astonishingly beautiful nocturne on grand piano, seasoned by a dreamy mellotron flute. The aggressive handling of the last piano chords serves to release the fire that had been contained for the previous 50 seconds - the appearance of the human heart that all this time had been behind the electronic paraphernalia. Such a brilliant ending is more than appropriate for such an evocative album.