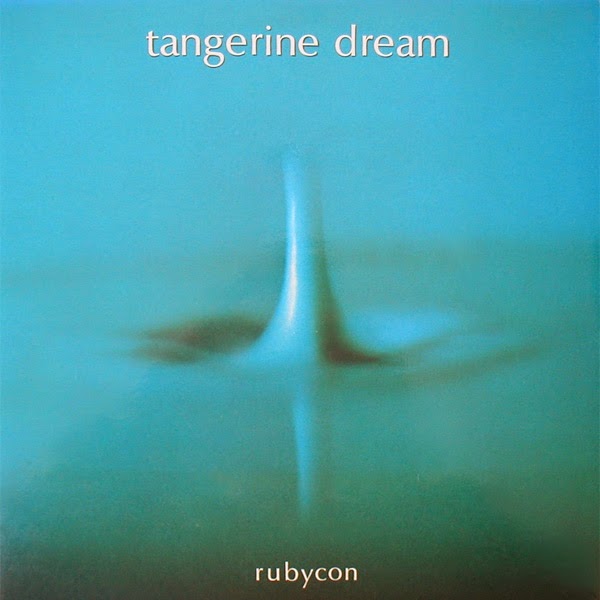 
"Rubycon" is TD's sixth album, the second released for Virgin. It is the continuation of the style they first deployed on 1974's successful "Phaedra". The album is divided into two 17- minute-long parts, both pieces develop intriguingly and unfold like beautiful flowers.
The first part begins with dark ambient sounds over which TD start to play various synthesizers and mellotrons. The music is stunning: it flows like a river, it takes you on a journey, you feel as if set adrift on the oceans of imagination. The music develops into a climax and then suddenly stops for the deep bass sound to enter with eerie effects and the journey continues. The bass pulsates slowly and strange synthesizer sounds flow to and fro, like shapeless animals somewhere in deep space. These amoebic sounds lead to another climax with the pulsating bass picking up momentum and becoming more and more dark. Sporadic piano stabs give the music specific spooky atmosphere. Percussion adds to the pace of this piece and then the music slowly flows away with the pulsating beat ceasing into oblivion. The piano stabs go on and on and the whole track fades out.

The second Part begins with horroric, flowing sounds which continue ca 4 minutes, when the fast-paced pulsating beat (exactly like the one from "Part one") kicks in. It sounds magnificent and it sucks you into a tunnel of sounds with an eerie, eastern-flavoured melody line which swirls from side to side while the electronic beat goes on and on. This is gorgeous!!! More dynamic than the first part, but certainly of the same origin. The beat fades into the sounds of waves, it makes you feel as if you emerge from an ocean of sounds! Then, a flute solo by Peter Bauman solemnly and melancholically concludes the album. With the final tones of the, now alone, flute you feel you need nore of this W-O-N- D-E-R-F-U-L music, yet this album is far too short... That's the only flaw of this album. Apart from that it is A MASTERPIECE!