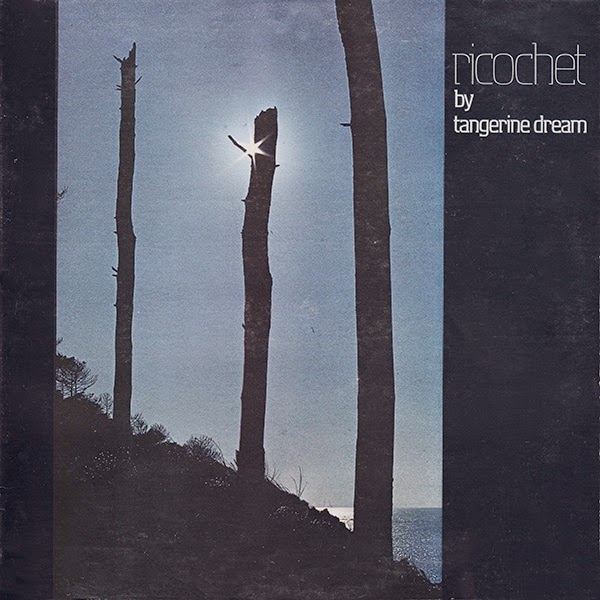 The original UK Virgin LP press of this was the last with the short-lived faun/tan label design. Further pressings exist with all subsequent label variants.

Once 'Phaedra' put TD on the map of international commercial success, the world was ready to openly receive their electronic-oriented krautrock offering and witness their transition through a road of progressively increasing finesse. This is where 'Ricochet' is situated, conceived as a two part suite to be played in some French and British churches during a mid '75 mini-tour. Part 1 kicks off with a few somber VCS3 chords and a hypnotic drum sequence that serves as a basis for the presentation for the main theme, a brief Arabic-like melodic line played on lead guitar, counter pointed by synth and mellotron, and balanced by lush organ layers and effective tribal rototom drumming: something very related (not derivative) to Ummagumma-PF and Agitation Free. After an interlude of synthetic stuff and taped monologues, the second section of Part 1 emerges as a frenetic reprise of the main theme, with Froese's guitar getting actually pretty Frippian (this is where TD remind me a bit of Heldon). The final result is quite epic, indeed - what a way to keep a listener hooked via the clever use of arrangements and variations on a not so complex but really catchy theme. Part 2 starts in a much calmer mood, with a Chopinesque grand piano intro on dialogue with a pastoral mellotron flute. Once the intro is over, here come lots of synthetic layers, harmonies and sequences that are soon to harbour mesmeric flows of mellotron and Frippian guitar, passing by and by again in full splendour. The final minutes are filled by a passage of dissonant flute mellotron at first, then a soft VCS3 sequence that ends it all quite tenuously. The crowd's ovation is nothing but a fair tribute to a great musical work that serves as a gigantic prelude to a masterpiece, 'Stratosfear': this one doesn't get that far, but pretty close, indeed.