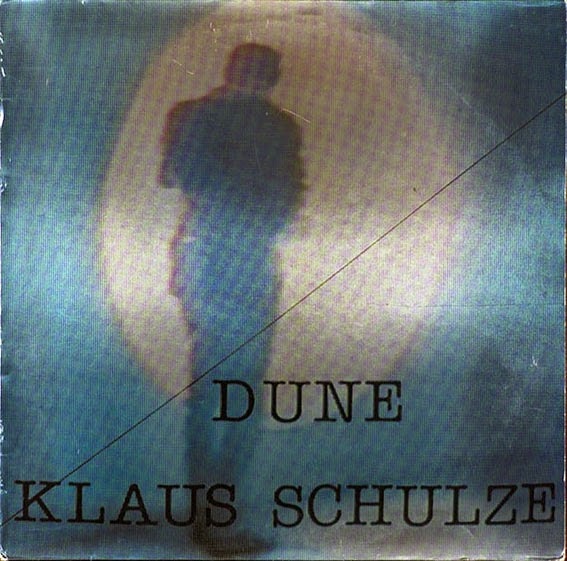 The eleventh album (in only seven years) by Germany's prolific synth pioneer probably couldn't help leaving many fans scratching their head, arriving as it did on the heels of his monumental twin LP "X". It was, and still is, a truly schizophrenic effort: one half instrumental, and typically brilliant, and the other half a curious change of pace featuring an unlikely collaboration with singer ARTHUR BROWN...yes, the same post- hippie pyromaniac from "The Crazy World of..."

And it's a concept album (of sorts) too, perhaps a signal that Schulze was trying to cash in his kosmische credentials and at least partially engage with mainstream musical trends of the late 1970s. The inspiration was Frank Herbert's popular sci-fi novel, a fixture on counterculture bookshelves during the '60s and '70s (I think because of all that perception-bending Arakeen spice). So was the erstwhile drummer for TANGERINE DREAM paying tribute to a kindred space-art epic, or was he merely hitching his keyboards to a pre-sold commodity?

It's a moot question, at first exposure. The title track (all of side one, on the original vinyl) is classic Klaus Schulze, building on the success of "X" with even more breathtaking sonic vistas, and again employing the talents of Wolfgang Tiepold on acoustic cello. It might seem an odd instrumental match-up, but the combination of Tiepold's melancholy bowing and Schulze's arsenal of electronic effects is strong enough to send a shiver down even the most unsympathetic spine.

Schulze was always a generous composer (or a very lazy editor), and this masterpiece is no exception, clocking in at seven seconds shy of a full half hour. An appropriately arid mood is set in the opening eight minutes of more or less free-form improvisation, before Tiepold's mournful cello melody slowly rises over the horizon. What follows is one of the more stunning evocations of a desert landscape, capturing the essence of its unforgiving beauty better than any piece of music since Maurice Jarre's 1962 soundtrack to "Lawrence of Arabia".

(I speak from some experience: in my vagabond youth I would listen to "Dune" while driving the lonely highways of central Nevada, and to this day the music still conjures vivid images of sagebrush-scented valleys, heat-distorted alkali salt pans, and semi- abandoned Comstock ghost towns caught in a state of arrested decay.)

On this one track Schulze almost redefines the meaning of Space Rock (which, in the Berlin school of electronic meditation, was never really rock anyway) by removing the music from its usual cosmic clichés. The sound here is more spacious than spacey, with an almost classical-symphonic grandeur, and yet still manages to generate surprising tension over its slowly unfolding thirty minute length. The first chord change, teasingly held back until near the 11:00 mark, is a particularly satisfying moment of high musical drama.

Too bad the balance of the album (i.e. side two: "Shadows of Ignorance") is such a flat- footed misstep, at least by comparison. Give Schulze credit for trying to break out of his comfortable ambient shell, but he wasn't the first of his class to fail in the same attempt: TANGERINE DREAM had already released "Cyclone" a year earlier, also with vocals, and with similar mixed results.

The Klaus Schulze/Arthur Brown variation wasn't as willfully commercial, and would hardly justify any accusations of a sell-out. But twenty-six (count 'em, twenty six!) minutes of ersatz poetry sung over a dance-floor sequencer beat can still be more than a little tedious, although this criticism comes with a disclaimer: I admit to dredging my memory of the song out of some very cold storage. Only the magnificent title track remains in my music library, saved on one side of a 60-minute audio cassette tape before the album itself was returned to the used LP trading block.

On later releases Schulze would beat a hasty retreat (again, not unlike TANGERINE DREAM) back to safer, all-instrumental territory. But in retrospect "Dune" marked the end of an era.