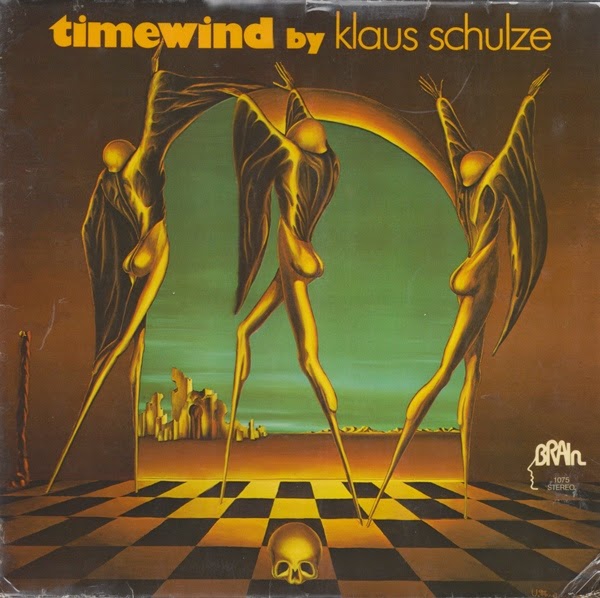 With Timewind, Klaus comes as close to perfection as he will ever, as his music has now reached perfection after still searching itself in Blackdance. As usual Klaus handles every instrument himself and the album clocked almost one hour, which was unheard of for a single vinyl disc back then.Adding to the perfection of this electronic space/cosmic rock music is the awesome Dali-esque artwork on this superb gatefold, where the innerfold's illustration is even more spectacular than the outerfold.

The beauty of this music is that (as with previous albums), it was recorded live on a 2-track Revox as a master machine. The opening track Bayreuth is named after the street where Edgar Froese and Schulze had their "studio" (actually an ex-barbershop store), and it is an epic and plunges you into a dreamland where vestal virgins abound to your feet as the music becomes the drug that gets you hooked. Klaus is pursuing the exploration of the Moog's possibilities with this album, but Timewind is absolutely not experimental, IMHO. Both composition are so well written and arranged that despite the still new and groundbreaking soundscape developed by Klaus and TD, it is completely accessible to a wide public and it is sufficiently romantic to be used as cuddling music without the proghead having to put up with these insufferable female-aimed love songs.

Wannfried is filling the flipside, but remains sonically close to its companion track. I think Klaus decided that a bit of humour was needed on this album and he chose to dedicate the album to Wagner, which of course is hilarious as the pompous and bombastic classical composer is completely at odds with the low-key floating and aerial electronic music Klaus was known for at that time. Anyway, Wannfried is at least as good as Bayreuth is.

This already fantastic album lasting almost one hour - this was much appreciated by fans to have to change the next vinyl side in more or less half an hour rather than stopping his girlfriend fondling every quarter an hour or so ? this type of music was quite suited for get involved deeper. But in the second half of the 00's, Klaus remastered and repackaged his early discography, and this album comes with three tracks to fill a second disc. Three tracks (only), but an almost 39 minutes Echoes Of Time track, that seems to be an evolution of the music Bayreuth. Ditto for the 12-mins+ Solar Wind, another (shorter) version of Bayreuth. However the shorter Windy Times is sonically fairly different, louder and more abrupt, than both the original album and the other bonus tracks, but it is a remake of the the album theme recorded in 2000. Not only that, but the album came out in a mini-Lp format on the Japanese label Arcangelo and this version is most likely the definitive version of this masterpiece of Kosmische muziek.