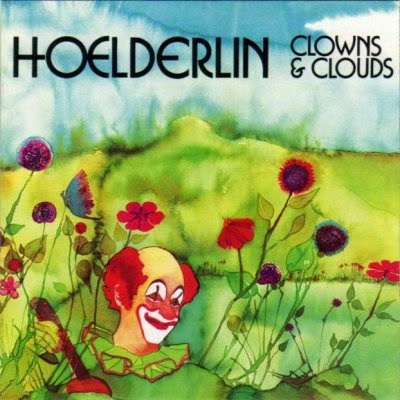 
Hoelderlin's second album was followed by the departure of Peter Kaeseberg, a fact that did not prevent the band from a large promoting tour, introducing new bassist Hans Baar.The more than 70 live dates of Hoelderling included gigs in Holland, Belgium, Switzerland, Denmark and Sweden besides Germany, while they regularly appeared in various TV broadcasts.Entering 1976 they revisited Conny Planck's studio with Karlheinz Borchert sitting on the production chair.Büdi Siebert appears again on sax and flutes in this ''Clowns & clouds'' album, released once more on Spiegelei.

This was another collaborative work stylistically speaking, combining the complex and fiery side of Kraut Rock with the delicacy of British Symphonic Rock in five long compositions, although the resemblances with GENESIS become here even stronger with the vocals of Jochen Grumbcow sounding now extremely similar to the voice of PETER GABRIELand the guitar touch of Christian Grumbcow closing more and more the STEVE HACKETT sensitive tunes.Even this way the music is top notch with pronounced folky vibes and emphatic instrumental deliveries with both complicated and elegant parts.Moreover there are also plenty of intense, lyrical moments surrounding the good musicianship of the band.Each track contains lots but tightly linked variations, evolving from laid-back overtones with a theatrical atmosphere to dense instrumental textures with nice interplays.These are characterized by some excellent violin work of Classical nature, smooth flute passages and the monster work of Jochen Grumbcow on keyboards, switching from jazzy electric piano to orchestral Mellotrons and from atmospheric synthesizers to irritating organ moves.As a result ''Clowns & clouds'' fails a bit in terms of originality, but still offers some great moments of professional music and well-crafted arrangements with a huge instrumental background.

Typical 70's Classic Prog by Hoelderlin.Adeventurous, demanding, rich but still melodic and poetic.Far from trully personal, but the contained music is absolutely sufficient and impressive.Strongly recommended.