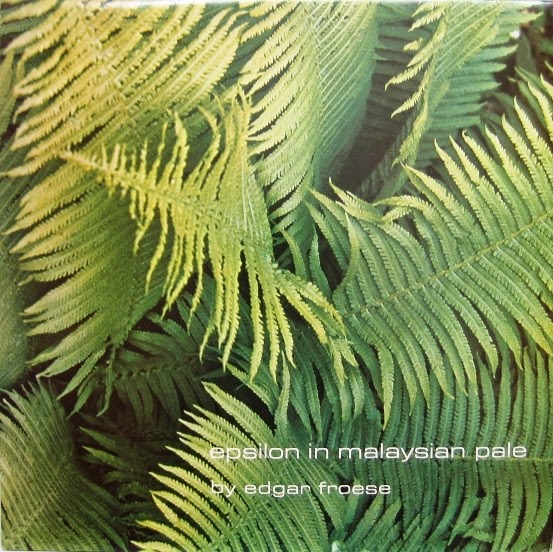 EDGAR FROESE's second solo album is a much more accessible affair than his first, "Aqua". That said, the second of only two tracks on this album will make TANGERINE DREAM fans feel right at home.
The title track, 'Epsilon in Malaysian Pale', starts with electronic -- or electronically-processed -- jungle birdsong and the sampled clickety-clack of a train (the KL to Penang train, perchance?). Delectable flute then drifts over calm Mellotron, making me so chilled-out I almost levitate. I'm slightly reminded of 'Sequent C' on TANGERINE DREAM's "Phaedra", but this has a more mainstream feel to it. Initially you might envisage the flute segment as the background to some TV programme showing seagulls riding the sea breeze, or panning across the countryside on a misty morning. The more cynical might say the track sounds like mellow lift music, as it's not particularly sophisticated or complex. However it's so darned relaxing and pleasant that even cynics should be won over in the end. Sequencer later in the track means that fans of TANGERINE DREAM will not feel ignored. Overall, though, the flute and Mellotron are what stand out in this mellow track.

TANGERINE DREAM fans will be on more-familiar territory in the second track. After a very spooky-sounding Mellotron start, 'Maroubra Bay' changes briefly into a mellow -- and very satisfying -- VANGELIS-like moonscape before returning to the familiar electronic ambient feel of TANGERINE DREAM. Whoever it sounds like, the track is pleasant and again very relaxing. The sequencer that comes in at around four minutes into the track is almost melodic, especially with horn-sounding Moog and Mellotron wafting around over it, but could probably put just about anyone into a trance, with the occasional electronic waves breaking on the sea shore being the final nudge onto a higher plane. The sequencer disappears in the last minute or so and Mellotron meanders slowly until it fades out. Very relaxing yet strangely exhilarating.

I have not heard FROESE's 2005 reworking of the original recording so cannot comment on that, but the original 1975 recording is certainly a worthwhile investment if you can find a second-hand copy. I do hope Virgin re-releases the original recording at some point as it deserves to be perpetuated. I'm going with 4 stars (Excellent addition to any prog rock music collection) because the atmospheric music on this album will quickly become addictive to most progressive music fans and should become a cherished part of any collection. Not as avant-garde, as starkly electronic or as complex as "Phaedra" or "Aqua", but very good nonetheless. Recommended.