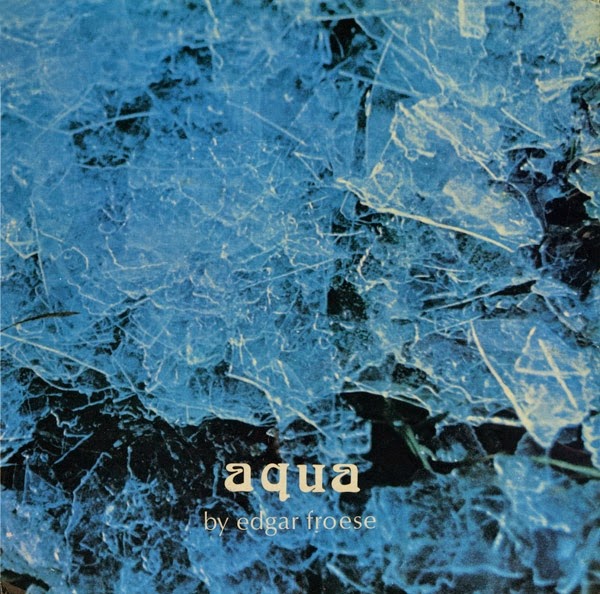 Edgar Froese's "Aqua" exists as two original LP versions...
1. The German Brain issue
2. The much more common Virgin issue
Not only is the track order different, but two tracks are different mixes. The gatefold cover also swaps the outside image around.
The later Eastgate CD release is a different recording.

Edgar Willmar Froese (6 June 1944 – 20 January 2015), Froese was born in Tilsit (now Sovetsk), East Prussia, during the Second World War, his family was expelled from his hometown after the war. He took piano lessons from the age of 12, and started playing guitar at 15.[1] After showing an early aptitude for art, Froese enrolled at the Academy of the Arts in West Berlin to study painting and sculpture. In 1965, he formed a band called The Ones, which played psychedelic rock, and some rock and R&B standards. While playing in Spain, The Ones were invited to perform at Salvador Dalí's villa in Cadaqués. Froese's encounter with Dalí was highly influential, inspiring him to pursue more experimental directions with his music. The Ones disbanded in 1967, having released only one single ("Lady Greengrass" / "Love of Mine").

After returning to Berlin, Froese began recruiting musicians for the free-rock band that would become Tangerine Dream.

Contrary to Klaus Schulze's successful career (after his departure from TANGERINE DREAM), Edgar Froese's solo work had a rather discreet impact on the audience. The reason is that he engaged in a musical direction very closed to TANGERINE DREAM's trademark. E. Froese involves in solo while he is still the front man and major composer of TANGERINE DREAM. He launched his personal career in 1974, just after the release of TANGERINE DREAM's huge international success "Phaedra".


His first effort called "Aqua" can be seen as the missing link between "Zeit" and "Phaedra". Musically it is pure electronic / pre-ambient / aquatic music with long instrumental pieces. Analog synths are mixed with concrete, cosmic and experimental effects. This album can be openly seen as his best with his second "Epsilon In Malaysian Pale" and his later "Stuntman". Published in 1975, "Epsilon In Malaysian Pale" is an impressive electronic / synth conceptual album in the direct line of "Phaedra", "Rubycon". Recorded in 1976, "Macula Transfer" has always been unavailable until today. Also signed on Virgin (as the previous ones) "Ages" is a consistent electronic work entirely directed by Egar Froese who pursues his musical line, bringing modern synth materials combined with acoustic elements, old vintage keyboards (Mellotron.) electric guitars and percussion. The electronic sonorities developed on "Ages" are connected to Tangerine Dream's production during the same period. Consequently it is closed to "Sorcerer" and "Cyclone". Produced in 1980, "Stuntman" delivers short but well made electronic / spacey tunes, maybe more accessible and various than previously. This one is maybe Edgar Froese's most popular and the last really recommended album he personally made. The soundtrack "Kamikaze" recorded in 1982 is a disconcerted album, made of short tracks which put the stress on digital instruments. The worst from Froese's solo career. "Pinnacles" (1983) is a nice pleasant synth meditative album, but nothing new. To sum up things "Epsilon In Malaysian Pale" and "Stuntman" are highly recommended albums for those who are in TANGERINE DREAM's Virgin era and in Peter Baumann, Michael Hoenig's pre-ambient / synth electronic works.

Here's a simple and luminating introduction for an album of heavy manners and distinguished art: Edgar Froese plays the essential role in Tangerine Dream, whether constructive and inspirational, crafting or improvising, controlling or disparaging, self-centering or generously avoiding the anxiety of blank music therapy (listing a couple of known orientation for him). He's a full front musician of impeccable "dreams" and imperative rhythms, in a time when Tangerine Dream offered the great impact in the short term of impressive electronic, and later in the times of surviving the same desires or managing radical new ones. In solo, Froese is the most prominent artist from Tangerine Dream (then again, we can't figure Franke or Schmoelling any more referential in a time of plague 80s and 90s, the classic mood was a sincere advantage for Froese to obtain some good works, only after to fall himself into treacherous mood and "moog" dispositions) ; the serum between the link of the great band and the private space of the solo adventure are never farfetched, even maintain a contemporary feeling. In the solitary dynamic of electronic music, Edgar Froese a couple of good albums that prove an essential mark, a very elevated train of composition, a highly defined familiarity of excellent taste and a good brew of synthesizing out the cosmic unravel within a head's sheer intuition, the abstract melody inside a point of pleasure, or the shape of clusters and the language of abstract by the resource of feeling open the sound, the time, the space and the motown melody. Outside these great elements, Froese continues on a share of lesser inquiring experiments, on works of soft evolution and on the more rough ways of him "dominating" the keyboard figure and "controlling" the linguine stage of electronic ardor.
Aqua astonished me, from early moment of discovering out Froese's own meads of self-portrait and motivated sound play to these monotonous achieved present years of knowing by touch his work, his sound, his style, as an essential, very artistic, cubic-closed and synth-malady album, as a debut of more than hoping great stuff, a work of more than expected detailed, hardened or aspersed elements, as a key brand dynamic composition meant for the subsuming planes of creativity, dark impression or tempting artistic ideas. And maybe out of all this exciting solo craft, the album doesn't receive the excellent review and the utmost congratulation, yet it seems lonely in its valuable haste of atypical, atonal and arrhythmic forces, the prime kind, the essential tone. To a sincere talk about how important Froese goes, till where and till when, he doesn't realize more than two grand, artistic and subtle works, this one and the next Epsilon In Malaysian Pale; and I wouldn't award the best kind of electronic suspired, synopsized and contempt to anything else than Aqua, first of all an exhaustive program of tough electronics and ambient lines, afterwards a difficult to placid listening, a language from tough to ironic, a work-load from adapted to self-controlled.

Aqua as level and craft is between Phaedra and Rubycon, meaning a very powerful experiment of ambient music, synth tonalities, wave-clusters and passionate afflictions/affections of adamant, impersonal, grave pressed and high sub-sequined music sculpture. Phaedra is of course an exaggerate point of view, then again two things (Froese being the composer of the inversed-color electro liquid fantasy and ambient-volatility "strand of nightmares", from the classic Tangerine Dream album, and the great detail of very tough expected music in this solo debut) almost allude the contemporary orientation which, without problems, helps Froese coordinate a very powerful masterpiece like Phaedra and a very transitory ambient-abstract explosion like Aqua. Articulate and neuralgic, this album would actually face the complaint of too late and too open experiments, yet, even if this is the best creation boiling point of Froese and his synth-essays, I say it's totally worth.

A great value I treasure for Aqua is yet something also missed from the high places of eclectic electronic and concentrating ambient recognition (mainly from the little exuberance or the too loaded craft it may have, then for not having essential sound-parts of special grip and taste). The enormous title track experiment is a complete fascination, from the elementary works of synths and ambient, to the phonetic and plastic sounds of water and cascade sampling, in great touch with a mist symbol and a suffocating parlor of wobbling sensation. A piece of long-stretch minimalism and monotony, yet a very serious effect of heavy works and volcanic precisions on what is the music of the numb taste, the sylph inside the creative touch and the hard resound of a clean potable disambiguation. The 16 minutes unbelievably balanced caustic and cognitive water-fluxion title track is essential, by my standards. Next there are three piece that try to combine the never to bright ambient and sequence with the never to exempt dark motives, crystal coils and powerful dualisms of sound, connection, fun render or moods. What is exciting from Panorphelia is an ambient-vibrations course and seasoned essence, plus small incision in the matter-lapping usual flow of stressing sounds and minimal over-runs. ngc 891, brewed under a special instrument and oriented towards more sequentialism, is another favorite of mine, since it grows, after the five minutes of Brownian sound-cycle into a game of a small sequence, with a totally ironic flair, a wheeling punctuation and a dissonance, almost showing the interest to not have a catchy rhythm, but an art course of "metamorphic" electronic illusions. Upland fights another minor ambient exposure, till the point of sketching down some cold sinus vibrations and some sound-phones effect. The album is totally appreciable, though a cold, "still-scaped", mono-powered and rupture-crystallizing essence from it recommends it, doubtlessly, for the mass experiment and the unique time of electronic music being a sensation design of cluster and disambiguation, then a great listening powder. By all taste, Froese grows more attractive stuff. By all standards, this is a peak and a momentary exceptional shape.

Edgar Froese's masterpiece, if ever to name one great achievement of his own bare work (though it nothing flawless to think off or contagious to excite from), is Aqua, ambient, experimental, abstract, liquid, chloroform and phase-phalic. Timeless and hard to obtain, I always prefer to admire this album.