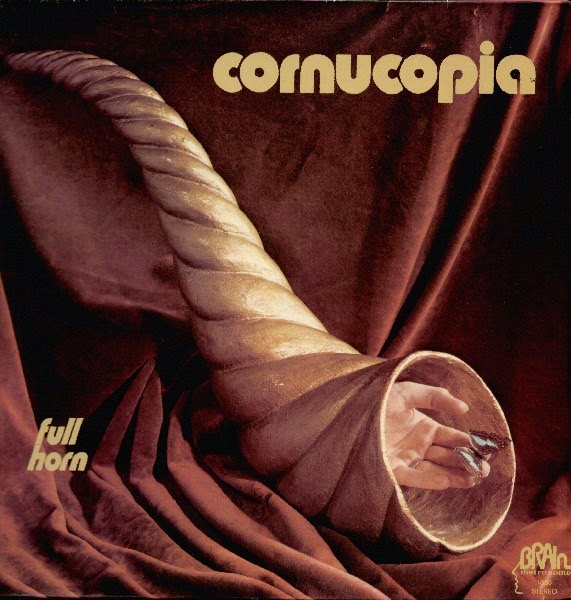 Cornucopia's sole album Full Horn is what I'd personally call a genuine Krautrock gem. Sporting a murky yet highly eclectic and varied sound, this album is a regular force to be reckoned with. Krautrock was more than just a few chosen artists such as Amon Düül, Can and Neu! - and even if those 3 acts pretty comfortably illustrate just how wide the range of sound was, it still doesn't quite put into focus just how sprawling and diverse the scene was.

One of Krautrock's branchings was made up of bands that incorporated fusion into the mix. Kraan, Exmagma, Embryo, Guru Guru and Passport all paddled these waters, whilst still, at least during their first couple of albums, remaining deeply planted within the German kosmische scene - better known as Krautrock today. Cornucopia fit the bill as well, although I think they are among the least fusion sounding of these bands. The emphasis on muddy grainy guitars and gelatinous song structures trumps those small jazzy rhythms that once in a while show their heads - only to be pulled back into the batter - getting thrown around in this psychedelic German Laundromat.

The first cut here is a huge slice of everything under the sun. People around here would probably call it an epic on account of its different movements and the running time of 20 minutes. It quite brilliantly conveys what this album is all about, which is mixing things up - throwing all kinds of different ingredients and differentiating moods into one big bowl and then serving it up like a sonic hors d'euvre. The organs are creepy and sticky like one of those small matinee pauses that used to fill up the tiny breaks in old movies. The guitars fluctuate between roaring fiery creatures going a hundred miles an hour to the swampy entities psychedelically sprinkling over the beat like new falling snow - ever so gently adorning the music in what feels like colourful piglets' tails. The vocals remind me of Amon Düül ll with the somewhat archaic and staccato sounding English. Come to think of it, the music does also seem like a close cousin to said band, although I do find the Cornucopia sound to be original and on its own terms. Still if you are approaching this record as a fan of Amon Düül ll, I almost guarantee sonic satisfaction.

With its belly full of two long cuts, the other one reaching 12 minutes, the band has plenty of time to develop their musical ideas and to branch out in whatever psychedelic and criss crossing musical patterns they wish to. Though most of this is orchestrated and rehearsed, the feel of the thing still omits a certain frivolous and jamming character, that I personally have come to love so intensely. Even within these orchestrated grooves, Cornucopia still manage to break free from the form and give to you something that is rare, extremely difficult and unforeseeable. A perfect example of this remarkable trait, is found on that opening cut called Day of a Day-Dream Believer (and no, it certainly doesn't sound like The Monkeys...), where the track suddenly starts relegating a certain groove that inspires what in the pop world would be called a chorus, or indeed a bridge. Here it actually does the same, although this bridge or whatever you want to call it takes off like an uncontrolled physics reaction. The backing singers fall off their hinges and suddenly start sounding like a pack of wild dogs, barking electronically and on top of each other - all whilst following the music that similarly spirals out of proportion. The music turns gelatinous and gooey - and by some strange miraculous musical connection, all of the 7 musicians come together and land on the same side of the Equator. Unbelievably fantastic playing right there! I just adore how this band churns out jams.

While I do believe I may have conveyed this band a tad too avant guarde in nature, I would like to stress just how winning this formula of splicing the structured way of grooves together with those wild and adventurous jam sections. It never becomes dissonant or harsh, which is why I'll happily recommend this fine album to anyone out there seeking to dive just a teeny tiny bit deeper into the mighty oceans of Krautrock.