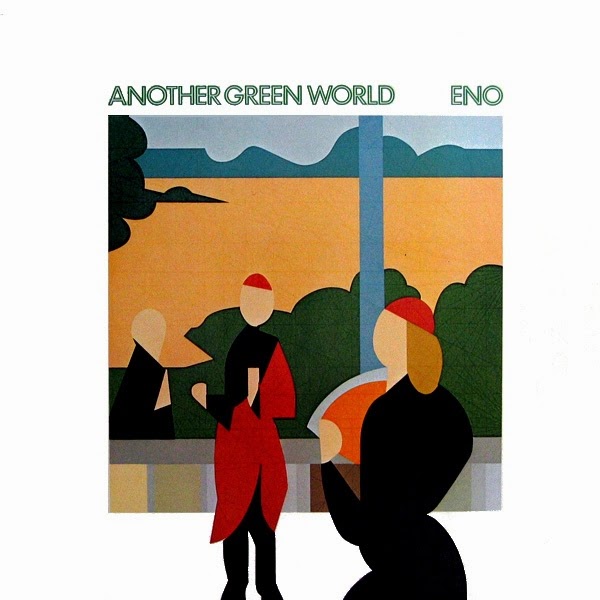 
Balancing the more structured sounds of his first two albums with tastes of the more texturally heavy ambient work to come, Eno's music is wonderfully vibrant on Another Green World. Showcasing his brilliance as both a quirky pop music maker and a craftsman of progressive electronic soundscapes and melodies it's hard not to be captivated by the near equilibrist qualities found here.
Being a monument of timbre variation, the first thing that really strikes you about the album is its colorfulness; a mainly electronic palette capable of reaching crystal clear ethereal notes as well as mysterious, low-end droning - and everything in between. It's remarkably hard to pinpoint a certain direction or any particular moods in the short songs. There are of course the pop ones, oddities marked by strong melodies and quirky, subdued percussion. Eno's somewhat flat and carefree vocals aids in making the dreamlike qualities stronger. Overall though, while far from directionless, the songs gladly drift off on their own accord in various studio acrobatics. Not in slow moving textures and minimal melodies like those you often encounter in electronic music, although shorter bits of that are also present, but instead anchored to tangible rhythm and melody, albeit in an often fragmented and transient way. There is a certain wistfulness to some of the music, but often with something playful and cheeky on top or underneath; just further proof of the strangely suspended atmosphere on Another Green World. Stylishly distanced, cold and yet alluring, controlled fieriness. It's not surprising that Eno collaborated with another artist with the same musical aesthetics; David Bowie during his Berlin era.

A typical compositional method is adding sharp, robotic sounds over a repeated and slightly varying series of distinct bass bursts and noodling s, with steady beat and enrichment from and underlying guitar or viola. There is seldom a clear lead instrument, but rather a holistic, layered approach where instruments come and go, but where no one really dominates. The buzzing and screeching noises produced by some of those synthesizers and organs are kind of hard to ignore though, but they're never really meant to be subtle either. It really is a melange of subtle and obvious, sharp and soft.

Being a mostly electronic album, you can't escape from the fact that atmosphere is key here. It's just not meant to be blazing guitar solos or other instrumental fireworks, but instead of the truly ethereal and cerebral albums of Tangerine Dream and others of that ilk (and even later Eno, to be fair) this a more musically engaging album, with meditative qualities that still manage to keep you on edge (or keep you awake for that matter!). The scope of the fourteen songs can change rather dramatically in terms of melody, ambiance and technique, but they all share one important ingredient; the detached, pseudo-academic presentation and experimentation. That, and layering. Add one there, remove it again, add it with another one, strip down to percussion and bass. It feels a bit calculated, a fact that has the potential to scare off some listeners.