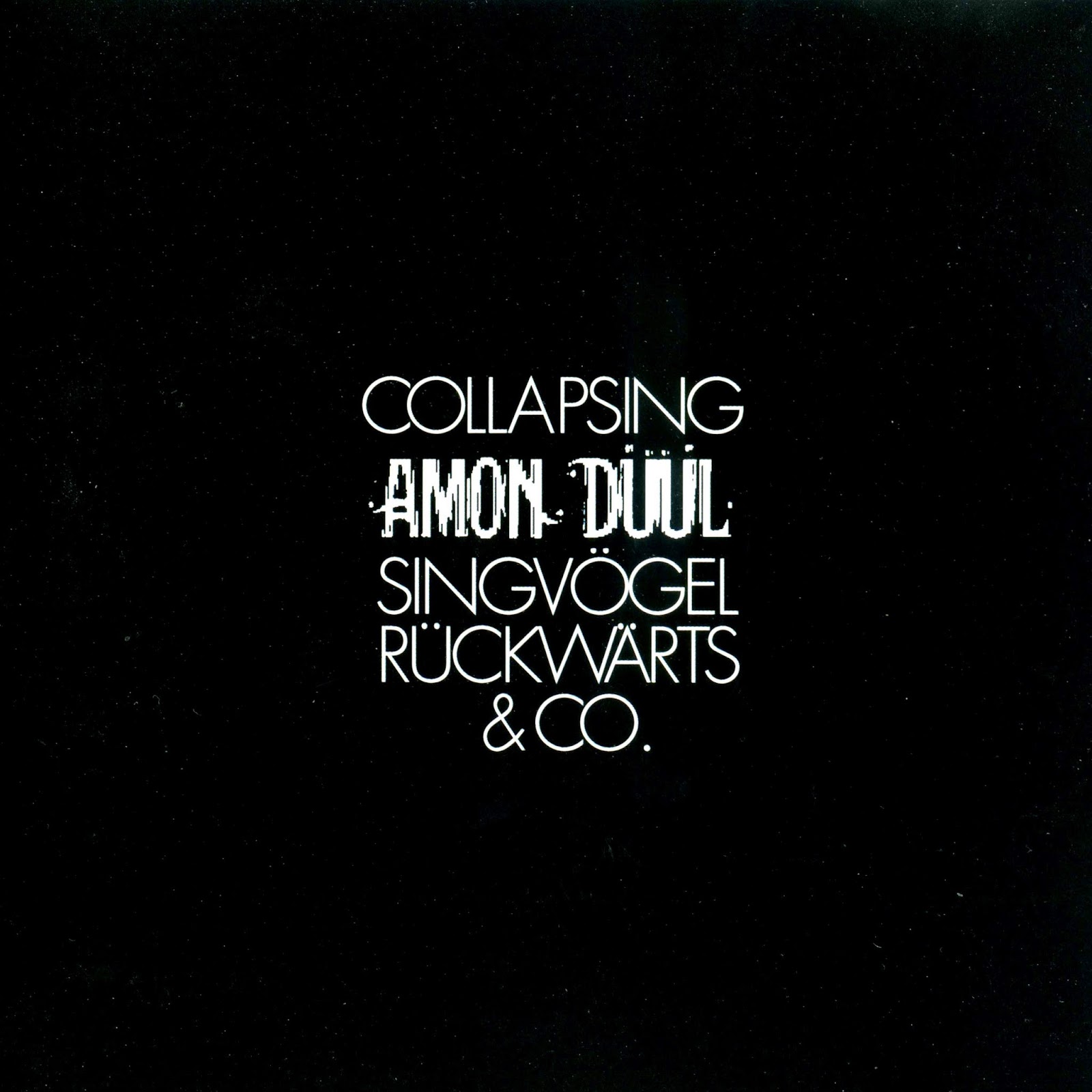 
This part of the Amon Duul sessions follows the style of the first recording of the gonzo jamming of this musical collective, the sound quality is a little bit better, and the atavistic session excerpts have been molded as collages with editing and enrichening them with soundeffects.

Most of the time this is tribal music, as there is a strong presence of ethnic collective drumming in the music, accompanied by toxicated waillings and chaotic fuzzed electric guitars.

There are also some very quiet parts there, though in some cases the building up of hypnotic trance is disturbed with sudden cuts or sounds, making this record a chaotic listening experience. 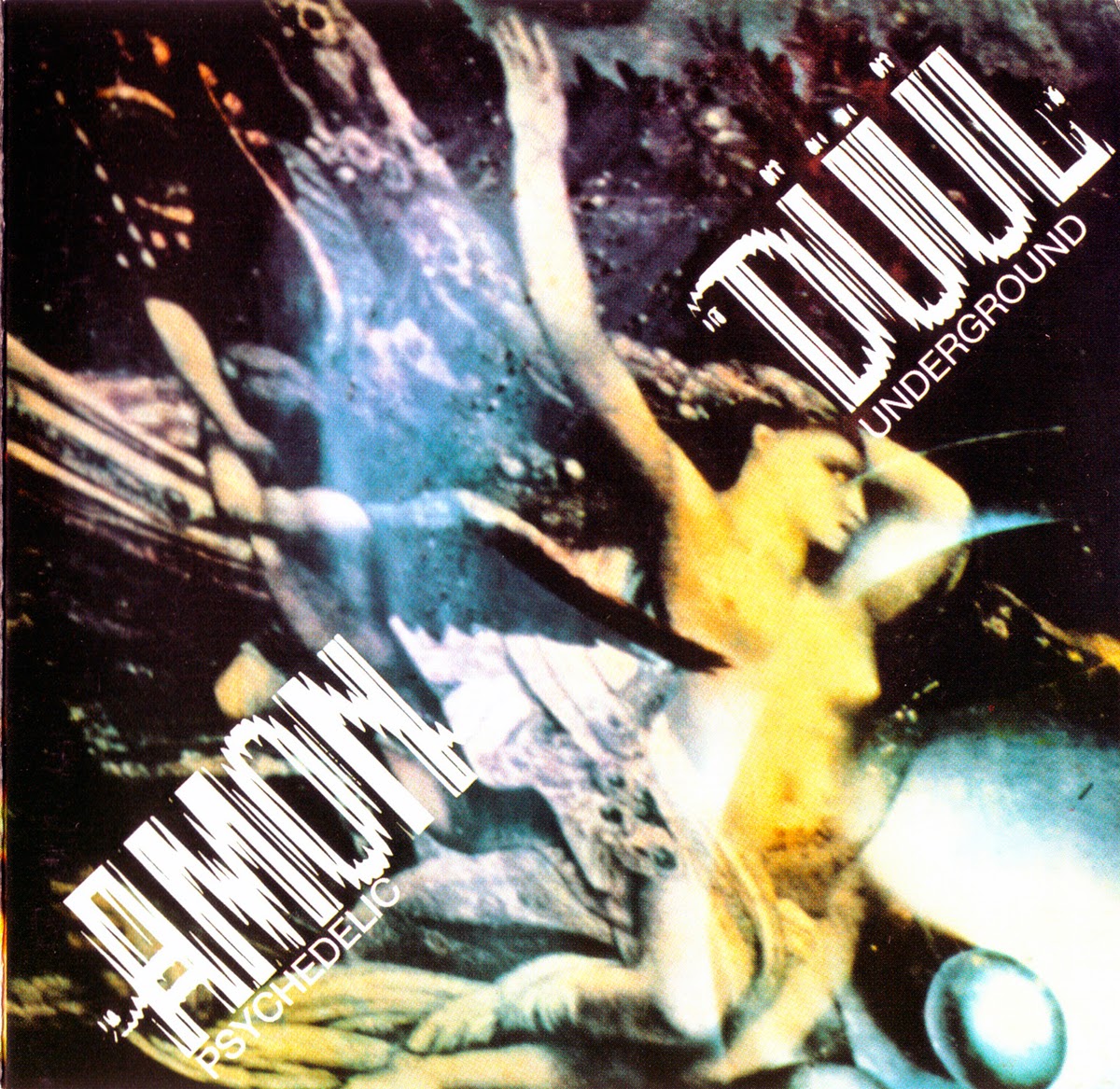 
Amon Duul were a huge musical collective out of Munich. “Eleven adults and two children which are gathered to make all kinds of expressions, also musical” made a spectacular appearance in a tv-show in 1968. Amon Duul’s name reportedly comes from an Egyptian mythological god (Amon) and a Turkish fictional character Duul.

Before they put out their first album they split though, and one half set off to form Amon Duul II. The others kept the name Amon Duul and in 1969 published the first Krautrock album ever, “Psychedelic Underground”.

Here, we are light years away from good production, good recording, tight arrangements and virtuosi interplay: Both versions of Amon Duul came from heavy left-wing hippy communes and therefore the group’s sound sounds as chaotic as you’d imagine a commune to be back then.

Starting on a 17-mins Sondosa track, where they give the tone of the album, just repeating endlessly a riff, without any kind of musical explorations, except for the hypnotic nature of their “minimalist” approach to their musical universe, the group finishes the album with a three-minutes fast-evolving improv centred around the cello player. There is a bit of space rock ala Hawkwind avant-la-lettre feel throughout this album.

On the flipside, “Mama Duul” is a very percussive 3-mins track. “Garten Sandosa” is another slowly evolving jam built on repetitive riff, where some bass drones (most likely the cello again) are the main interest. The following “Garten Morgantau” (also an 8-miun improv) is again featuring cello under very approximate guitar arpeggios, with soft spacey Gilly Smyth-like whispers. Ending the album is “Bitterlings Verwandlung” another absurd jam stuck with classical (choirs) music sound collage that had never been done until then.

In retrospect, this album as well as others posthumous release from Amon Duul, might just be the foundation stone of Germany’s awesome scene. In some ways, the strength of Amon Duul is that even when the band gets cacophonous and downright chaotic, you can feel the mega line-up remaining as tight as if they were a trio.

"Psychedelic Underground" appears to be a collection of music that summarises much of the ideals and ethics of the Progressive/Underground scene that thrived in the mid-late 1960s, but also incorporates ideas popularised by the Beatles and Pink Floyd in terms of experimenting with the more avante-garde styles of music that had long been explored in the realms of art music (I hesitate to call it "Classical", as much of it did not even involve an instrument!).

The range of marks awarded to this album really reflects the kind of album it is - there's much to sneer at and cast derisory remarks about, not least the appalling production and rather weak jam sessions, but at the same time, a vital energy is projected such that even when the music descends into near-noise, we can still sense the togetherness of the musicians in spirit, at least... as Headheritage.co.uk puts it; "90% attitude and 10% skill".

This might or might not work for you, but patience brings its own rewards with music of this nature, and it's only when listening beyond the production and the notes that the rather wonderful raw and primaeval nature of the music comes alive.

The music tends towards simple jams of one or two chord riffs with minimal changes and much walloping of drums. "Ein Wunderhübsches Mädchen Träumt von Sandosa", which doesn't feel quite as long as you think it might consits of two of these, joined loosely with a tae interjection, and rounded off with another one.

"Kaskados Minnelied" is a lot less predictable, despite being built around a simple 'cello line. There's a better dramatic shape here, despite a desparate need for a 'cello tuner, and an overall dark, earthy sound that seems to approach that of a digeridoo.

"Mama Düül und Ihre Sauerkrautband Spielt Auf" appears to be yet another piece built around the percussion section of "Saucerful of Secrets" - which was an impossibly influential release of the previous year. A little production experimentation fills out the 3 minutes in a way that is not so much interesting as baffling - but curiosity and a peculiar tenrions does encourage the listener to stick with it.

"Im Garten Sandosa" has a really peculiar air to it - a "vibe", if you will, and indicates a kind of progression in the album overall that I was not expecting. Yes, it's a single riff, with minimalistic changes - and that's its' strong point. Let yourself be sucked in by this one, and it's a buzzing journey filled with exotic locations and excitement with a climatic ending. Close your mind to it, and it's a terrible sitar-driven hippy dirge.

"Der Garten Sandosa im Morgentau" follows on quite naturally, and, dare I say it, logically from the previous track, and blends in elements of the earlier material on the album, becoming, as Julian Cope's site accurately puts it "the weirdest song on this very weird album.", full of ghostly spookiness, surprisingly fragile dark edges, and plenty of space, with hints of the first Hawkwind album.

"Bitterlings Verwandlung" is, if anything, even wierder, exploding, as it does, with taped "Classical" music, and regularly returning to odd snippets here and there in a kind of collage that seems to take inspiration from Stockhausen's work in a far more serious way than anything the Beatles attempted - including (or perhaps, especially) "Revolution #9".

A very unusual album - almost unique for 1969... except that a lot of unique albums were released in 1969 (and subsequently also virtually forgotten about), including the quite astonishing "An Electric Storm" by The White Noise.

Pretty much up there with Can's "Monster Movie" as an unmissable example of Krautrock, unmistakably, an Excellent addition to any prog music collection