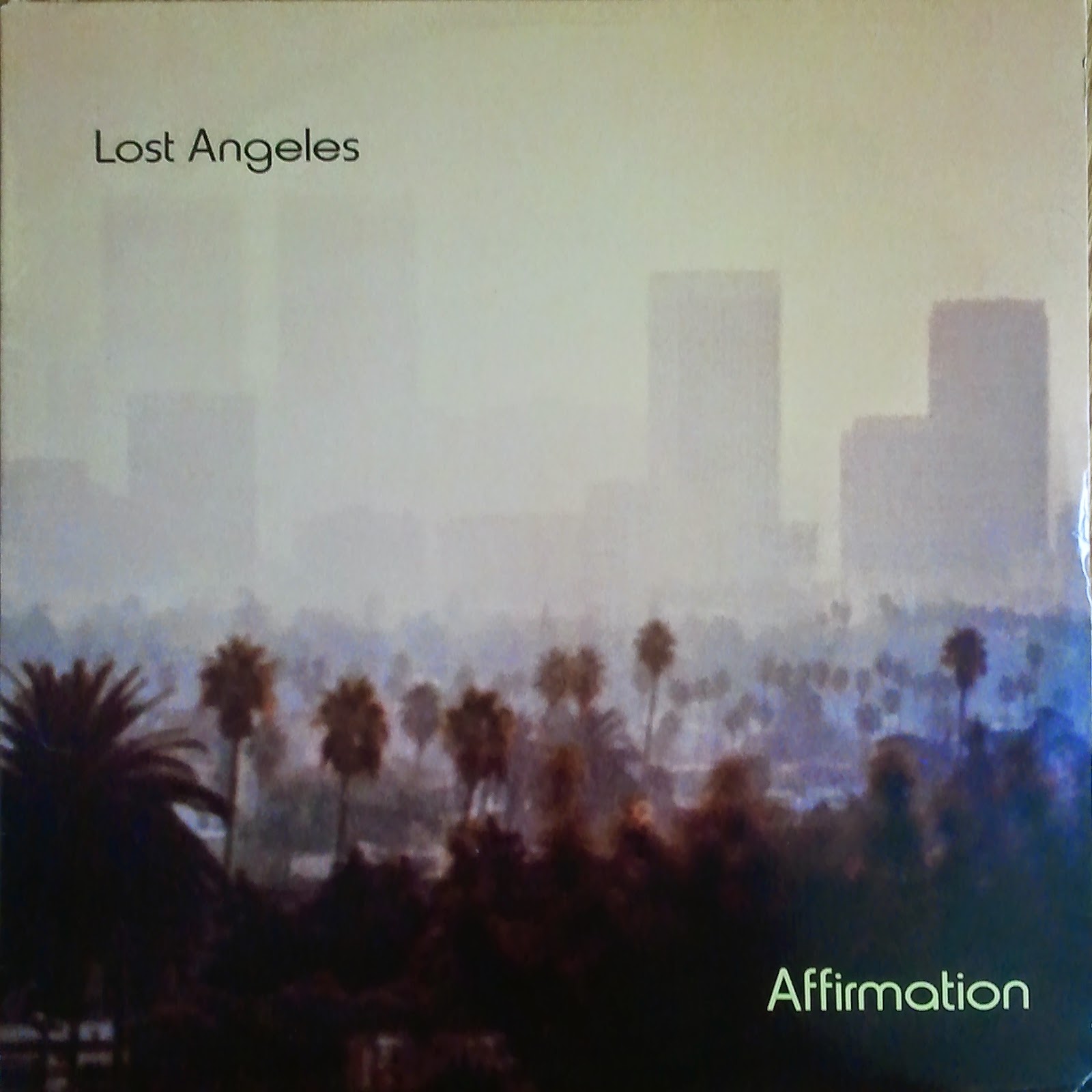 Another long-ago discovery of 'the mighty osurec' resurrected from utter oblivion for a short spell or spin until oblivion again swallows it up again like one of those stupid 'twitter feeds' that has 'gone viral'.  I realize I've been slack in the past summer months but of course, swimming and entertaining the children off from school have taken their expensive temporal toll.  Despite this I am pretty confident there are many more treasures out there for us to force oblivion to regurgitate for our brief listening enjoyment.  For those who are cursed with those wild animals popularly referred to as 'young children' will well understand the difficulties inherent in living with these unusually persistent entities who drain out one's energy like an energizer bunny with a cheap battery.  For those not familiar with this peculiar meta-zoo-like existence, consider listening all day to a five-year-old playing dog barks and ducks honks on a cheap casio digital keyboard given as a christmas gift, without respite, for a succession of three to four hours.  It may be that such a universal exposure would be all that were sufficient for stopping the world population growth still proceeding exponentially.

This music is as lovely as it is lost, with inventive violin-based melodies vibrating over a jazz group playing a variety of fusion-centred compositions.  I think maybe the reissue if there ever is one other than in one's dreams should be entitled 'Angeles - Lost Affirmation'...

The album is much or less a case of Teresi and Ross with little contribution from the rest of the members actually.Mid-length tracks,characterized by energy,fast tempos and a good production.Teresi shines with his keyboard work,from jazzy electric pianos to groovy clavinet to spacey synth introductions.Ross on the other hand performs some nice and blistering solos along with tons of powerful drives.The fast tempos of the tracks help to deliver a very rich and dynamic sound overall.Of course there are some black holes also like the few dull,fairly commercial moments in here,close to other Fusion bands of the time like UZEB, and the fact the album seems like a battle between keys and violas doesn't help either.Still the offering of the band is decent enough to overcome these disadvantages. 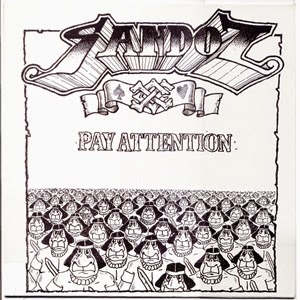 
The kind of unknown recording you always hope somebody’ll unearth, but rarely does. Completely gone and twisted, over-the-top Beefheartian rockgrunt 'n blueshowl by an early 70’s band nobody’d ever previously heard wind of.

Contains recording from 1971 of short-lived underground hardrock/psych/blues trio that featured John Goodsall on guitar, vocals (sounding like vintage Captain Beefheart!), and compositions, as well as Jim Mercer on bass and Gary Lonsdale on drums.

As the name of the group might imply, this is head music, and is really not anything like what Goodsall went on to do with Brand X. Three longish tracks unearthed from the vaults. This has become an instant collectible by virtue of the fact that only 350 copies were pressed.

Really, the only peers this recording has in the UK were some weirder EDGAR BROUGHTON BAND moments, the prog end of STACKWADDY, and perhaps that RUSTIC HINGE LP.

A genuine whiff of Ladbroke Grove in its heyday, Sandoz were a crazed, little known outfit featuring lead guitarist, John Goodsall en route from Babylon to Brand X, bass player Jim Mercer and drummer Gary Lonsdale . They played a handful of gigs in 1972 including a Greasy Truckers show, and left behind these three amazing tracks.

In his liner, Colin Hill notes, 'Sandoz is pure ephemera, a cosmic thunder flash rescued from the clutches of a sun-sized spider in a million-mile wide cobweb, a unique incandescent chemical reaction'.

Named after the Swiss laboratories where LSD was first synthesized by Dr Albert Hoffman, Sandoz were a classic power trio in the tradition of Cream and the Jimi Hendrix Experience, their music showing more than a passing debt to the good Captain and his Magic Band, early Amon Duul II and Miles Davis's Bitches Brew. 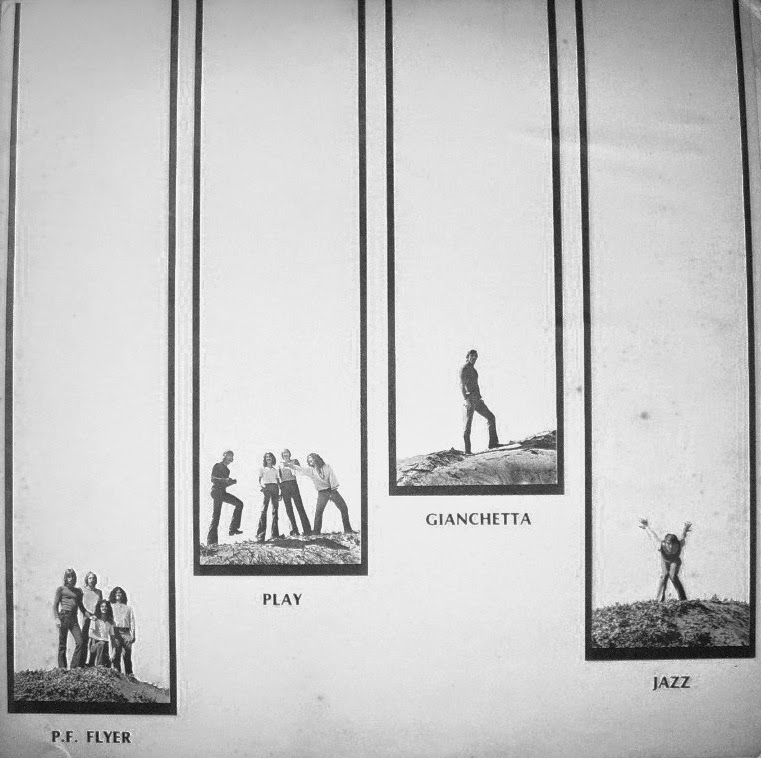 A short album, not even topping 26 minutes, P.F. Flyer produced this one instrumental psych blues LP. Loads of fuzz guitar and Hammond organ dominate. As a friend says about one song: "The track "Rocks Off" in particular would probably make those hipster DJ crate-digger types' heads explode, with the heavy open drum breaks and wild Hendrix-style fuzz/wah guitar." Better than most of these type of instrumental albums from 1970 and prior.

Well, here it is! One of the rarest psych/prog LPs in the world. P.F. Flyer - Play Gianchetta Jazz, AVG LP 101, 1970. Desired by many, heard by very few! This album almost never comes up for sale, so it may be your only opportunity to snag this one. Please bid accordingly!
Cover: Strong EX, with just a couple of minor dings and very little aging to the ancient paste-on labels.
Vinyl: Flawless M-, plays perfectly with no surface noise. Please excuse the flash from my digital camera, as the LP labels look perfect in person.
Only a tiny handful of copies exist, and it has a very interesting backstory. To this point, the only real information available has been the very minimal entries in the Acid Archives and Pokora collector books. However, here's an excellent description written by a good friend of mine who's a top expert on rare and obscure music:
" It seems like this album has been on almost every collector's wantlist, but hardly anyone has heard it. Well, there's good reason for that, as there are no more than 10 or 12 copies known to exist. A handful of copies were initially discovered by a local Bay Area record dealer years back, but no others have ever turned up since then. This guy was actually able to track down some of the band members and other people involved and get the full story behind this album, which is really hilarious. They were apparently students at a San Francisco dance studio run by an aspiring choreographer named Anthony Gianchetta, circa '69-'70. He had some ideas about using "hip" rock music for his dance routines, so somehow a group of his pupils got a band together and took up the task. The problem is that they were stoner hippy kids and decided to basically ignore his instructions and jam out this mostly undanceable instrumental psych excursion instead! It seems that everyone was pretty upset with this, but they basically had no choice but to release it as is at that point. It must have been a tiny micro pressing, with most of them probably ending up destroyed or discarded. In any case, it apparently wasn't too big a career setback for Gianchetta, as he seems to still be quite active as a stage choreographer in California to this day, as you will see if you google his name. Musically, the best description I can come up with is "accidental library psych". The track "Rocks Off" in particular would probably make those hipster DJ crate-digger types' heads explode, with the heavy open drum breaks and wild Hendrix-style fuzz/wah guitar. But, at well over $1000 and basically unavailable on the open market, they probably won't be diggin' it any time soon!" 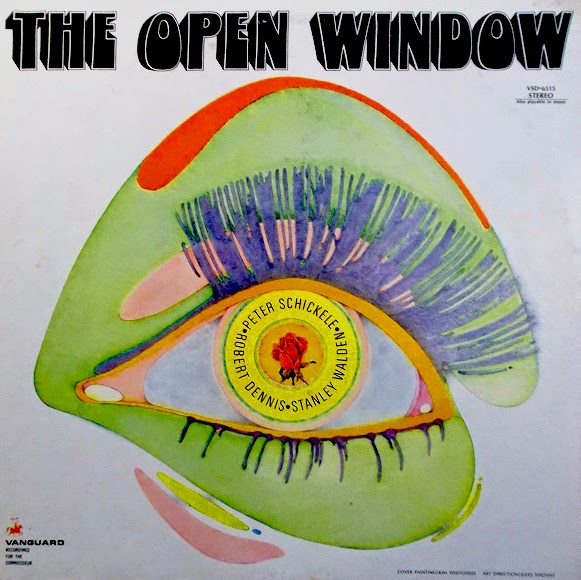 
THE OPEN WINDOW is a group formed by and featuring PETER SCHICKELE, ROBERT DENNIS, and STANLEY WALDEN in the late 1960s who all had similar musical backgrounds and have similar bodies of work.

The group wrote the score and lyrics for the very-long running and infamously risqué Broadway nudie musical "Oh! Calcutta!" They then recorded a self-titled group album,

"The Open Window" self-titled album is an eclectic melange of avant-rock, chamber rock, psychedelic, raga, jazz, pop-classical and baroque, honky-tonk, and folk music elements. It has some similarities with Brain Wilson's Smile, David Axelrod, Jean le Fennec, Van Dyke Parks, and has an early Gentle Giantish feel to it.

"Three Views from the Open Window" was recorded with the Louisville Symphony in 1968.

The most famous of the Open Window group is Peter Schickele, who has composed more than a hundred works which includes symphonies, chamber music, choral works, and soundtracks to films such as Silent Running (a favourite sci-fi film of mine) and Where the Wild Things Are. He is best known for his satirical work under the pseudonym/ fictitious character P.D.Q. Bach, which is very funny and clever. He studied at the Julliard School of Music and his primary instrument is the piano in The Open Window, but he is also a lauded bassoonist -- like the other Open Window composer/ musicians, he plays various instruments, which, as with all three, includes piano, woodwinds, and percussion. He has composed and arranged music for Joan Baez.

Robert Dennis also has composed choral works, musicals, and has composed film scores (notably for the short film, Milk). He has written scores for a Shakespeare Festival, has performed original works on a tack piano for the Mad Painter series, composed for PBS television, and has written and performed music for the US children's TV program Sesame Street. He graduated from Julliard with honours, and then spent a year in France on a Fullbright scholarship.

Stanley Walden has been a prolific composer, writing scores for operas, symphony orchestras, film and musical scores, as well as chamber music, and has written significant amount of works for the piano. He was on the Julliard School of Music faculty.