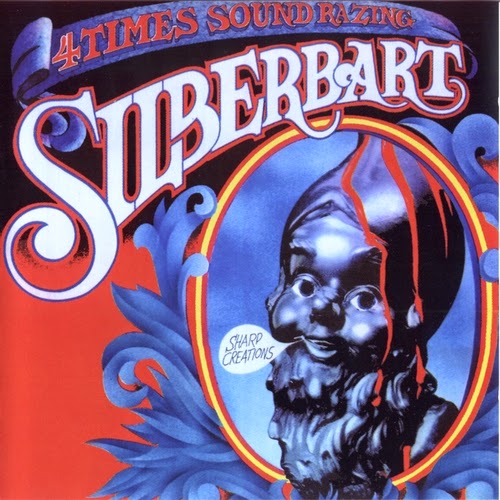 An other lost psychedelic gem. Originally published in 1971 on Philips, Silberbart's first and only effort called "4 Times Sound Razing" represents a propulsive, blasting heavy rock experience with furious psychedelic freakouts. Very Closed to Guru Guru extended jams with lot of intuitive sounds. The band is led by the "killer" guitarist/ vocalist Hajo Teschner. Silberbart have been formed as a power trio for a maximum of dynamic/driven epic songs

Starting out with a somewhat straightforward heavy prog song with screeching vocals - sounding like you´ve just surprised the singer in the shower while he was busy masturbating to an Iron Maiden track, this album is anything but your normal progressive recording. Chub Chub Cherry, as the starter´s called, is what I´d call an anomaly within 4 Times Sound Razing, and for lack of a better phrase to pin it down - it just feels pasted on, standing tall like a lesbian gorilla at your local church´s Christmas sermon. It´s a pity, because the rest of the album screams for a better and far more appropriate beginning - one who could tell stories of the scheming devil inside the music, and how it got there.

When you get past this rather uncharacteristic opener from Silberbart, and venture some minutes into the following Brain Brain, you realize what an amazing, out there and freakishly original record this is - and perhaps first of all, how different this band really sounds! As a matter of fact, the avid listener will probably get to that conclusion far earlier than that, and most likely feel disorientated and perplexed - thinking: is this really the same band? If so, how did those drugs manage to take a hold so damn quickly?

The main ingredient to this mayhem, is the amazing storm-trooper guitarist Hajo Teschner, and although I don´t particularly enjoy his vocals, which are close to distraught, semi yelping, acid drenched and approaching that of someone crying out helplessly from a bad dream, - you can´t really dismiss this guy´s extraordinary talents on the guitar.

How does it sound then? Hhmm.... Imagine this highly gifted axeman being taken away by the government on some bull[&*!#] charge, like wearing too many shirts with orange colours, licking stamps at the veggie section in the local supermarket, or being quite fond of Cat Stevens even after he really went solo - it doesn´t matter though. This musical prodigy gets thrown in the darkest pit you could ever imagine, bereft of light, food, and constantly subjected to a mind-numbingly loud playing soundtrack of Boney M, Schlager music, Metal Machine Music and Dolly Parton played at the wrong speed. This goes on for a week or 2, and then finally before releasing this poor guy, they tell him that they had to barbecue his beloved poodle, simply because of an overpowering curiosity - due to a baffling question raised during one crazy night of Trivial Pursuit. Then imagine driving, what now surely must be one ticked off bugger to the nearest gig, where his band-mates eagerly await the return of their front man, and then you´re nearly there. The wildness and total brutality of Teschner is what drives this band. He roams some of the same lands as Tony Iommi, even if he sounds much more bewildering and enraged.

The music here is created by this terrific guitar creating demented riffing, spiralling solos that seem to go off the map - to never never land presumably. Behind the man possessed sits one hell of a drummer, who much like Ginger Baker, is able to conform whatever hard hitting psychedelic mantra subjected to him into some form of groove. And boy does he provide groove! With some aptly placed double-pedal work, and a penchant for long drawn out musical bridges performed on the toms, the Baker reference is not that far off. Just beware of some of the jamming bits, which lurks around this album like long lost booby-traps of the east. They sit comfortably, awaiting the unsuspecting listener, and BOOOM! goes off - blasting you out of your comfort zone with some furiously played guitar, that sounds like it´s successfully been mated with an Indian raga gone berserk. The drumming patterns shift, and goes completely mental - mimicking a tropical storm with roaring cymbals and insanely played anti-rhythms.

You really have to give it up for the bass player here. Werner Klug is his name, and he is what keeps this earth-shatteringly musical mania from torpedoing out beyond any form of comprehension. He is very much the quintessential bass player operation, which he quite magnificently masters down to the t. He works like great big tent poles for a mad circus from hell, and keeps the thing from flying away in the impending hurricanes, which oddly enough seem to stem from the performers themselves. Cirque du Soleil brings its own storms y´know?

I´d recommend this captivating album to fans of The Flower Travelling Band´s Satori. Devotees of early heavy German psychedelic hard rockers like Jane, Birth Control, Black Widow, - and maybe to those out there in the big wide world, who can imagine a porous and slightly demented version of Black Sabbath running wildly across violet landscapes of melting Krautrock sands.
Posted by Unknown at 12:19:00 PM 1 comment: Links to this post