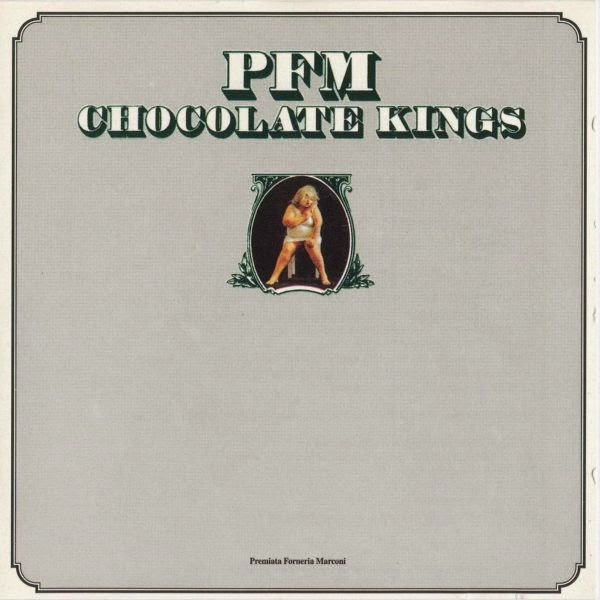 The vinyl album I have features the American flag surrounding some chocolate (hence the title) on the cover and is far much more appealing than the one featured here. Still, they will receive lots of criticism for this cover.

I was so in love with "The World." that I didn't hesistate for a second to buy this work. Without any listening as usual for me. I just bought albums either on recommendations or because I knew the band.

This release is probably less symphonic than its predecessor but the music is still very good. Some more jazzy influences (more to come, unfortunately) like during "From Under" or "Out Of The Roundabout".

The band is also writing their own lyrics in English. Their collaboration with Sinfield being past history.

Almost normally, with such a title "Harlequin" starts as a "Genesis" song during their early days ("Trespass"). Still, at mid-part, a strong and jazzy part completely disconnects with these origins. The vocals, though, are rather close to Gabriel's ones (especially during this song but not only). They seem a bit forced IMO.

One of my favourite song is the title track. Fully joyful and very close to the "E Festa" spirit. A festive song indeed with a great beat and a passionate melody.

If I had to point out a weaker point on this album, I would definitely say : vocals. Maybe a production problem. This is particularly true during "Paper Charms". It reminds me the poor vocals sound on the original version of "ELO II". But this problem was solved much, much later with the remastered version. Unfortunately, there won't be such a treatment for this "PFM" work.

And it is a pity, because this is probably my second favourite here. Complex, with several changes and a good violin solo. Synth are also well used and the rhythm is rather sustained.

Actually there is absolutely no weak track on this album. The bad news being that it will be the last one of their greatest and most creative period but that's another story.