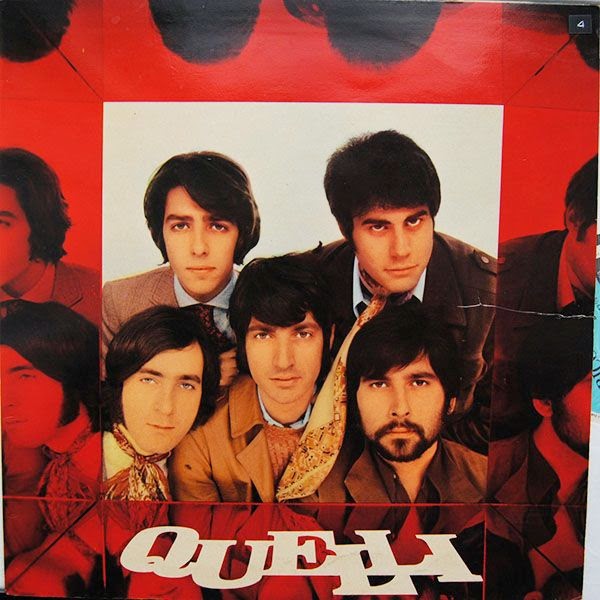 I have always felt there's a lot in common between GENESIS and PFM, starting with that Symphonic Pastoral style so unique in the Italians but also in the first two GENESIS albums, but after listening I Quelli, I'm more convinced of this similarities. As in the case of the Charterhouse School band, three classic era PFM members were in the Italian group (Mussida, Di Cioccho and Piazza) and like in From Genesis to the Revelation, the I QUELLI album is a collection of short simpler songs with a clear Psychedelic influence and 60's melodic music, where hints of their future magic can be heard.

Of course I will never try to compare this cute album with masterpieces as Per Un Amico or Historia Di Un Minuto, but I like it, there's naive charm with no pretensions that captured me from the start, but most important we can listen some very clever instrumental arrangements and nice vocals by Di Cioccio.

I won't try to make a song by song review because the music there's not much to comment, except in a couple of tracks like the cover version of Rain and Tears by APHRODITE'S CHILD called Lacrime E Pioggia, which maintains the original spirit but a very unique sound that only an Italian band can add.

It's also interesting the "silly" cover of Hole in my Shoe by Traffic (Tornare Bambino), soft, melodic and with a very beautiful vocal work and nice sitar. Of course there are weaker songs like Hush (Cover from Deep Purple), that really demonstrates us that they were born to be an Italian Symphonic band and not a Heavy Prog one.

From their original material I was impressed by the dramatic and elaborate Nuvole Gialle, that has really spectacular moments and the romantic Sigillato Con Un Bacio, which was poorly covered in Spanish by a Peruvian band that hated when I was a child but really loved with the excellent arrangements and the orchestral passages of I QUELLI.

To summarize: Don't expect a Prog or a really complex Psychedelic album, it's a cute collection of songs with ups and downs that deserves to be listened as part of the history of the most recognizes Italian Prog band, just as in the case as From Genesis to the Revelation.